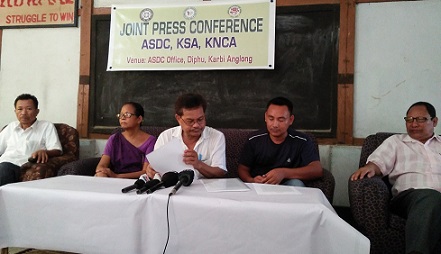 The bandh has been called with a demand to pressurise the Central Government for holding tripartite talks on creation of a separate autonomous hill State carving out of Karbi Anglong, West Karbi Anglong and Dima Hasao districts.

In a press conference at ASDC office here on Friday, ASDC president Holiram Terang said, “All essential services like medical emergencies, water, power and others have been excluded from the purview of the bandh.”

It may be recalled that police firing took place at Bokajan on September 3 and 4 in 1986 during a bandh called by the ASDC, KSA and KNCA.

Terang said, “The people of Karbi Anglong, Dima Hasao and West Karbi Anglong have all along been aspiring for a State of its own like those of other hill areas of Northeast India. This demand of the hill people is five decades old. But the Centre and State have never handled the issue properly.”

He also said, “The Central Government has ignored our demand, though it is genuine. During the creation of Jharkhand, Uttaranchal and Chattisgarh, our demand was once again left out. It was the same when the newest state of Telengana was created.”

Terang further said that the ruling BJP leaders, starting from Union Home Minister Rajnath Singh to Union Minister Nitin Gadkari have failed to fulfil the promise of creating an autonomous State, which they had made during their election rallies.

The ASDC also stated, “The hill people are living in abject poverty, that wealth is being looted and plundered, basic entitlements like employment, health and education are being denied. With the State Government taking back most of the powers from the autonomous council, life for the hill people has become almost unbearable. Creation of a Hill State comprising Karbi Anglong, Dima Hasao and West Karbi Anglong has become paramount to us all, once again people will rise up to fight for their just and democratic right.”

The ASDC also stated it has launched its ‘second phase’ of movement demanding statehood with submission of a memorandum to the Central Government through a mass rally last March 26 in Diphu for creation of a Hill State. “The Central Government has not responded to this,” it added.

Terang requested the people from Nagaland and Manipur to support them during the 24-hr Karbi Anglong bandh stating that “it is a genuine demand of the people of Karbi Anglong”.

NH 36 and NH-39 cutting across the district will be affected during the bandh. The press conference was also attended by president, KSA, Suren Hanse, president, KNCA, Merina Beypi and others.