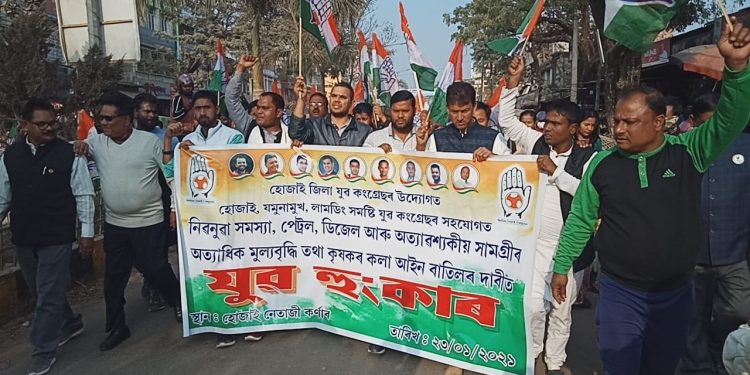 members of Youth Congress staging a protest in Hojai on Saturday

The Youth Congress from Jamunamukh, Lumding and Hojai assembly constituencies has staged ‘Yuva Hunkhar’, a protest against the controversial new farm laws, unemployment and hike in the price of essential goods at the Netaji Point in Hojai.

The protestors shouted slogans like ‘BJP go back’, ‘Narendra Modi go back and ‘Repeal Indian Agriculture Acts’ during the protest that took place on Saturday.

The protestors also pointed out that the rise in the prices of essential commodities like food items, petrol and diesel are exerting a financial strain on the common people, many of who had lost their sources of livelihood owing to the ongoing Covid-19 pandemic.

The protestors also criticized the BJP government for its complete failure in fulfilling the promises they made to the people of Assam ahead of the 2016 state assembly elections.