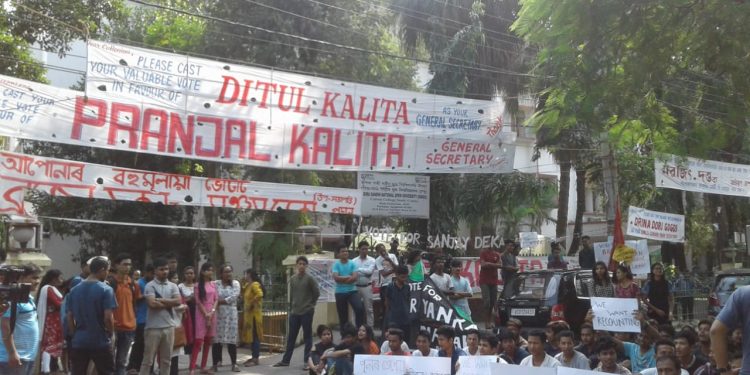 The results were announced on Saturday night.

On the other hand All Assam Students Union (AASU) bagged ten posts.

Pranjal Kalita has been elected the general secretary of Cotton Univesity Students’ Union (CUSU). Pranjal was backed by Shatra Mukti Sangram Samiti. Pranjal, who is a boarder of CM hostel of the varsity, defeated Amlan Jyoti Kalita of third semester, Bituprative Boruah of fifth semester and Priyanka Nayak of third semester. Ditul Kalita and Hirakjyoti Bora of first semester and Nabajit Kalita of fifth semester had to bite dust before Pranjal Kalita from Mahendra Nath Deka Phukan hostel.

Brojen Phukan of the third semester has been elected President and Violina Deka as the Vice President.

Two candidates were uncontested. Around 3628 candidates cast their votes from a total of 5520 in the CUSU.