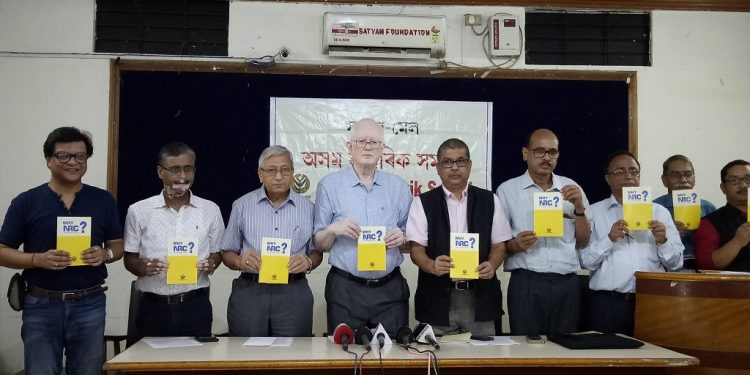 Former Assam Director General of Police (DGP) and president of Asom Nagarik Samaj, Harekrishna Deka on Saturday said that various circles with vested interests have been circulating desperate and disturbing narratives on National Register of Citizens (NRC) to create confusion among people nationally and internationally.

Deka also said, “Many attempts have been made to drive a communal wedge in a multicultural society of the Assam on linguistic and religious lines before and after publication of the NRC.”

He was speaking at the formal launch of a comprehensive booklet – ‘Why NRC?’ – on the issue of the updating of the NRC in Guwahati on Saturday.

Deka further appealed to the BJP-led coalition government in the State to strictly monitor the state scenario so that no provocative statements can create unwanted situation as the State has already faced many desperate attempts.

Lashing out at the BJP, Deka said that BJP at the Centre and State have been interpreting the whole NRC issue differently.

“BJP’s national president says something and here in the State, people like Shiladitya Dev and Ranjit Das and other leaders say something different. These things are misleading the people of the State,” Deka added.

Meanwhile, senior journalist Prasanta Rajguru urged the government not to harass people in the name of D-voter.

Rajguru asked the government to find out an alternative mechanism to identify and deport illegal migrants.

“Many people, who were sent to detention camp after lower court had identified them as D-voters, were declared as Indian by higher court later. We oppose this kind of harassment. Hence we demand the government to find out an alternative mechanism, “Rajguru said.

Asom Nagarik Samaj under the presidentship of Harekrishna Deka also favoured for granting work permit to the D-voters until the deportation process completes through diplomatic way.

Deka further informed that the booklet would be distributed across the nation and abroad to deliver a clear image of NRC and its necessity.