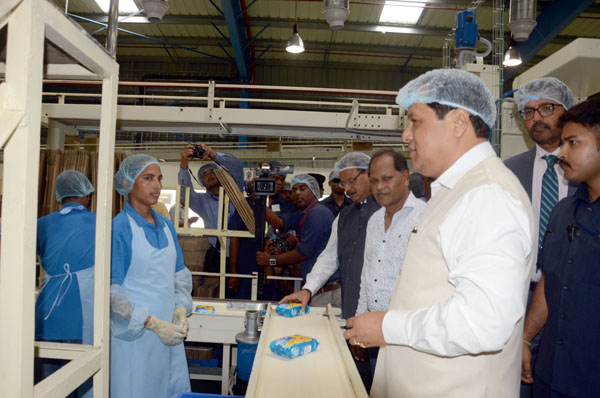 At the inauguration ceremony, Sonowal said, “Many people had apprehensions about the realisation of more than 200 MOUs signed during Advantage Assam: Global Investors’ Summit. But the state government has been able to prove that industrial renaissance has truly begun in the state. As a result of those MoUs Tata Trusts has collaborated with the state government in building 19 cancer hospitals in Assam, Future Group has set up a shopping mall and now Britannia Industries has set up its biggest Greenfield manufacturing facility here which is largest in the country. Our government acts on the promises and fulfils them.”

More than 1000 people have been provided employment in the facility and the plant has an annual production capacity of 60,000 tonnes. The facility is built with the ambition of adding more manufacturing units of new products in near future.

Urging the local people of Rampur under Palashbari assembly constituency to consider the manufacturing plant as their own, the chief minister said that only a sense of ownership of the people can help the company grow and generate more employment opportunities for the residents.

Appreciating the Britannia Industries for employing 70 percent women in the total workforce in the plant, Sonowal invoked Prime Minister Modi’s “Beti Bachao, Beti Padhao” motto for enabling the women to take leading roles in the society.

Speaking on the occasion, Industries and Commerce Minister Chandra Mohan Patowary urged the local youths of the area to take advantage of these industrial players coming here which will generate employment opportunities. He also informed that consumer goods major ITC is also setting up a manufacturing plant nearby which would provide more jobs to the youth here.

Patowary remarked that plans are afoot to start international flight from Guwahati to SE Asian countries in October this year which will give impetus to business activities here.

Managing Director of Britannia Industries Varun Berry informed that the company has plans of expanding its footprint in Assam by setting up a finished goods distribution centre with an investment of Rs 20 crore which will cater to the entire Northeast market. He also thanked the Assam Government for extending full cooperation to his company.

Local MLA of Palashbari Pranab Kalita and VP Britannia Industries Vinay Singh Kushwaha also spoke in the programme which was attended by many other dignitaries.