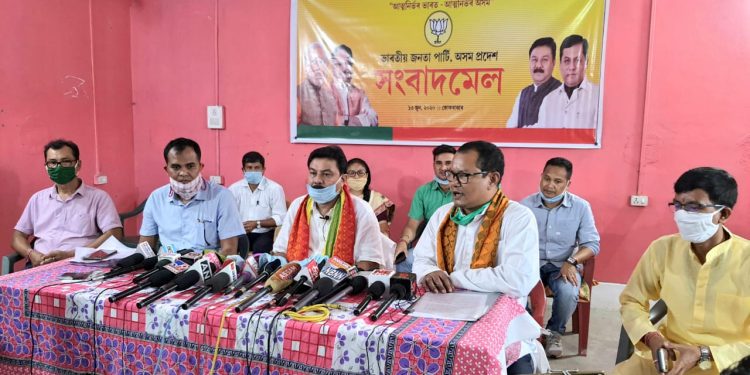 With the objectives of reaching out to the public and highlighting the successful completion of one year of Narendra Modi-led government at the Centre and four years of Sarbananda Sonowal-led government in Assam, the state BJP unit will kick start ‘Samporkho Sthapon Abhijan’ from June 16 next.

Talking to reporters at the party office in Kokrajhar, Assam BJP president Ranjit Dass said the party will reach out to 50 lakhs people in 126 constituencies across the State starting June 16 next.

The Assam BJP president lauded the Narendra Modi government in the Centre saying that the Jan Dhan Yojana has benefitted over a crore women in the State.

Likewise, the Ujjwala yojana has also beneffited over 55 lakhs women.

He also said the State Government under the leadership of Sarbananda Sonowal has come up with various schemes for the development and uplift of the people including women self help groups, widows and handicapped in the last four years.

On the BTC election, Dass said the BJP too wanted that the election should be held at the earliest but it is upto the election commissioner and the State Government to decide depending on the conducive atmosphere and situation keeping in mind the COVID-19 pandemic.

He also expressed his confidence of the party candidates winning the election and forming the government in BTC.

He also said the BJP would collaborate with the party who would emerge the single largest party after them.