Beware, the mouth watery candy may spoil your child’s health! 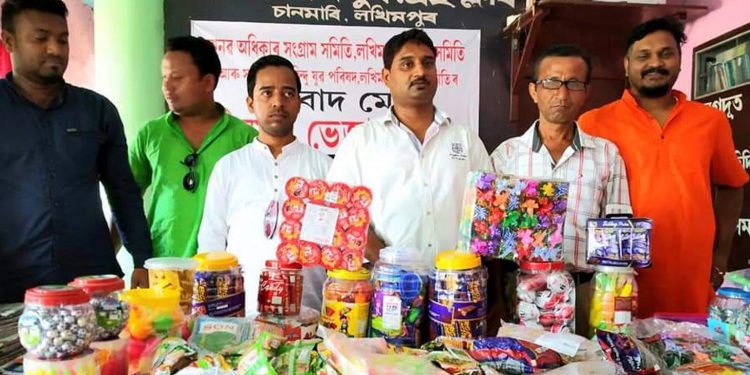 MASS and HYCA leaders with the adulterated candies and confectioneries. Image: Northeast Now

Leaders from both the organisations accused the Lakhimpur district food and health departments of complicity in checking the sale of such products.

Lakhimpur MASS secretary said that around 500 brands of food products of suspicious origin and manufacture are available in the markets of the district.

The leaders also displayed almost 50 such products, along with their list, which was purchased from around 10 places in North Lakhimpur.

“Most of these products are popular among the children,” said Singha.

“But shockingly the Food Safety and Standard Authority of India (FSSAI) number on the label of most of these products are not found in records when investigated”, he added.

He also alleged that the licences of some companies have already expired or some of the products did not state anything about the standard of their product.

“While the licence of Sonu producing Mix Fruit and SBM Food producing Macau Pan had already expired. On the other hand, GRC Biscuits producing Moto Patlu has no chocolate permit,” he added.

“The manufacturing date and their period of use were also not printed,” the MASS leader further said.

The MASS and HYCA leaders also came down heavily on the concerned food safety and health department officers.

They demanded the district administration should take steps against these adulterated, unsafe food products immediately.

“If they fail to take actions, we will then take the steps of agitation,” they said.

The organisations also submitted a memorandum to Lakhimpur DC requesting him to take immediate actions.