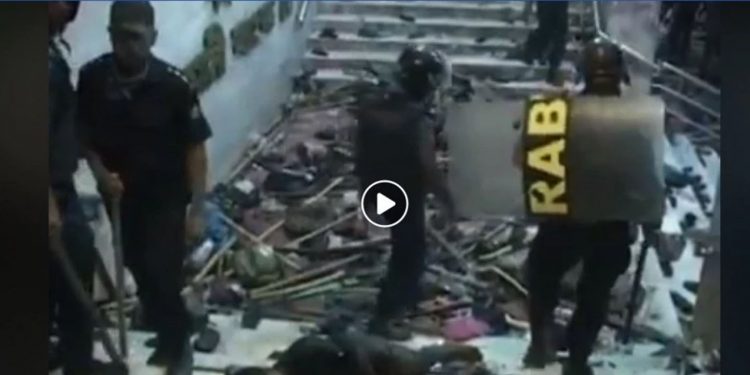 A screen grab of the video

A seven-year-old gory video from Bangladesh, where one can see police beating up protesters, is being widely circulated in social media claiming it to be from Assam.

In the “disturbing” video one can see policemen brutally thrashing people, bodies lying in pools of blood and people running for safety.

“People are opposing NRC in Assam and they are picked up from their homes. But the media will not show this,” most people have written while sharing the video.

The video, with its sensitive issue and topic, sends a wrong message to the world at a time when anti-CAA protests in Assam have hogged the limelight.

“The video is from Dhaka and is seven-year-old,” reported India Today while bringing out the truth behind the video.

If one closely observed the video then one can see RAB written over the dresses of the policemen.

RAB, which stands for Rapid Action Battalion, s an anti-crime and anti-terrorism unit of the Bangladesh Police.

“Fake videos like these, at a time when several persons across India have lost lives in the anti-CAA stir, can have a negative impact,” said Agnidhar Baruah, a citizen of Guwahati while speaking to Northeast Now.

“Police should immediately arrest those involved in the circulation of such fake videos,’ he added.

“I admit that police in Assam have stood against the anti-CAA protesters but not with such brutality, as seen in the video,” he added.

“Anti-CAA protests in Assam have been more or less peaceful, except for a few sporadic untoward incidents,” Baruah added.