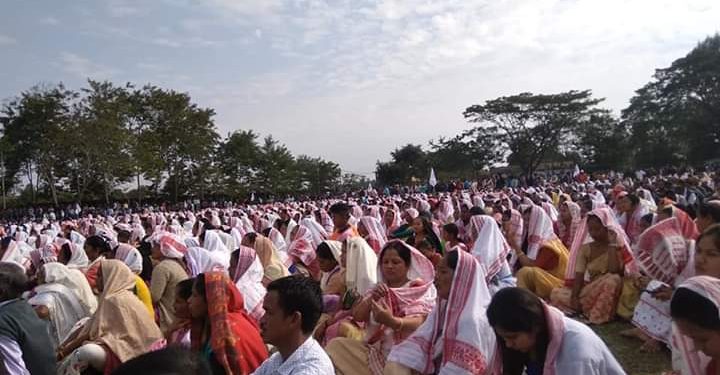 The anti-CAA protesters came from every part of Dibrugarh and Tinsukia districts including from the chief minister’s own birthplace Muluk Gaon village under Chabua revenue circle.

The protesters later assembled at the Young Blue Club playground to participate in the ‘Janatar Xokiyoni’ (Citizens’ Warning) programme organised by the All Assam Students’ Union (AASU).

The participants including students, lawyers, artistes, doctors, writers, senior citizens, employees, journalists and general masses vowed to carry forward the agitation against the CAA until it is scrapped.

Addressing the rally, AASU general secretary Lurin Jyoti Gogoi reiterated that CAA was not acceptable to the people of Assam and the state cannot bear the burden of a single Bangladeshi entering the state after 1971, be it a Hindu or a Muslim.

He mentioned that the CAA violates the Assam Accord signed in 1985 which specifically mentions that all foreigners irrespective of religion who came to Assam on or after March 25, 1971, shall be detected and deported from the state.

“The Centre has forcefully imposed the CAA on Assam without the consent of its people and our movement will continue till the law is scrapped,” said the AASU leader.

Gogoi said the indigenous people of Assam will not live as second class citizens. Assam has already accepted immigrants from Bangladesh till 1971 and it cannot take the burden of even one more person.

He said all illegal immigrants who have entered the state after the 1971 cut-off date should be identified and deported.

“There is no question of welcoming even a single illegal immigrant whether he is a Hindu, Muslim, Christian or from any other religion. The CAA will convert the Assamese indigenous people into a minority in their own state.  We are going to fight it till the end,” Gogoi said.

The AASU general secretary also lambasted chief minister Sonowal saying that he was only concerned about securing his chair through ‘illegal Bangladeshi votes’.

Hazarika’s house was burnt down during the anti-CAA movement on December 12.

Many government installations were burnt down by the agitated people in the area.