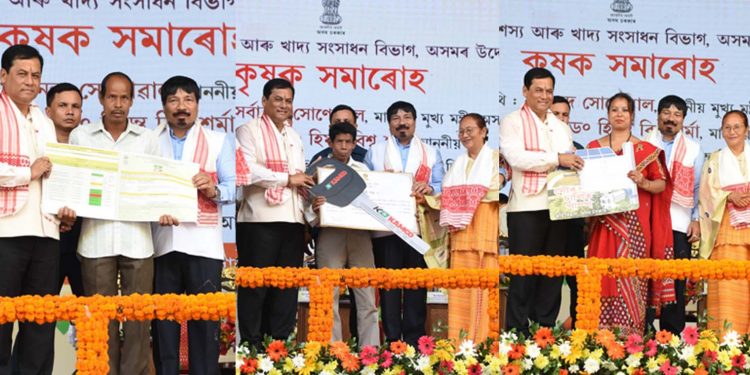 Assam chief minister Sarbananda Sonowal on Tuesday said 20 lakh farmers in the state have been provided with Soil Health Cards.

Saying that the farmers must know the quality of their farming lands, Sonowal stressed on the need to provide water health cards to the farmers.

Sonowal said this while speaking as the chief guest at the Krishak Samaroh in the Veterinary College playground, Khanapara.

The event was organised by the agriculture, horticulture and food processing department of the Assam government.

The CM also said 5 lakh farmers in the state had been provided one-time grant of Rs 5,000 for buying farming tools and equipment under Mukhyamantrir Krishi Sa Sajuli Achoni in the previous year.

Six lakh more farmers will be covered under the scheme in the current year, the CM informed.

“Our Government realises the dignity of a farmer’s hard work and toil while growing food for the society.”

“We are embarking on the journey to fulfil Prime Minister Narendra Modi’s vision of doubling famers’ income by 2022,” said Sonowal.

He informed that Prime Minister Modi-led government at the Centre had released an amount of Rs 1200 crore for implementing various schemes for farmers’ welfare in the state.

He highlighted the Central government schemes like Kisan Man DhanYojna, Pradhan Mantri Fasal BimaYojna and Pradhan Mantri Krishi Sinchai Yojna as the indicator of the PM’s commitment towards the farmers of the country.

Sonowal stated that CMSGUY with a budget outlay of Rs 30,000 crore is the state government’s strong move to transform the rural economy.

Referring to the exposure tour to Vietnam provided to 14 model farmers of the state, the CM said the farmers could learn the modern techniques used by the Vietnamese farmers to increase production.

Sonowal urged the educated youths of the state to take up farming as a means of self-employment while adopting modern technology.

He said the state government is providing subsidy up to Rs 25,000 in agricultural loan amount of Rs 1 lakh and said farmers must take advantage of such schemes.