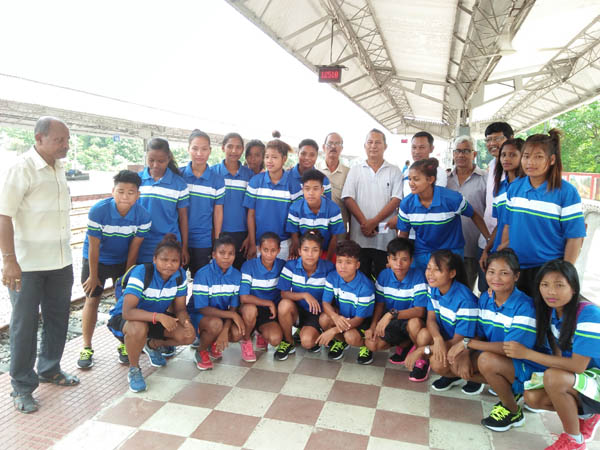 A 20-players women football squad from Assam left the state for participating in the 24th National Senior Women Football Championship.

It will be held at Cuttack in Odisha from September 20-30. The team boarded the South bound train at Kokrajhar Railway Station on Tuesday morning.

Executive Member (EM) of Sports and Youth Welfare, BTC Doneswar Goyary wished the team a good luck at Kokrajhar Railway Station and see off the players along with sports organizers and former players.

Talking to reporters, Goyary said Assam women soccer team have left for Cuttack, Odisha to participate in national senior women football championship under the leadership of Bina Suri who is also the manager of the team. He said the state women’s team participated in the national championship last year too but failed to reach the final stage. This time, the state team has prepared better to face other contingents of different states, he said adding that the prospect of state team is better this time.

Goyary said BTC has been giving priorities to the development of the sports. The concerned department looks after the sports personalities and achievers in the national and international events, he said adding that the council has been extending support and other facilities to the sporting talents.

The coach of Assam team Mintu Bordoloi while talking to reporters said he was glad to have a good team with more skillful players. He said last time the state did not find sufficient time to select the best performing players. He hoped that this time the state team will play with full vigour.