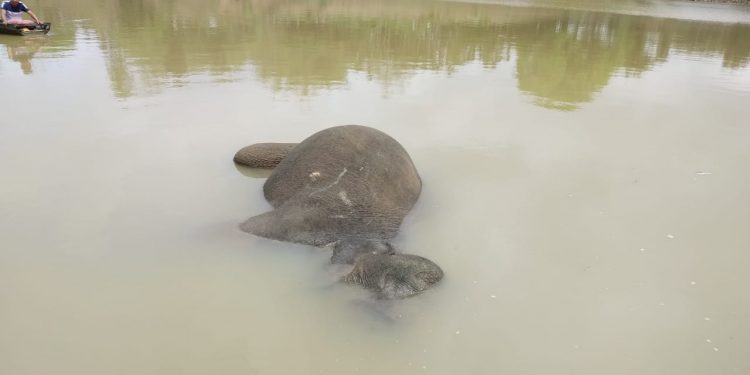 As per information, the incident took place at Kumrakata reserve forest along Hojai and West Karbi Anglong border.

The female pachyderm along with the herd of around 40 tuskers was moving towards Kumrakata Reserve from West Karbi Anglong in the wee hours of Monday.

The female jumbo suddenly came in contact with high intensity wire hanging and thereby fell into the Kopili river, which passes by the reserve.

Notably, high voltage wires pass amid the reserve forest between Hojai and West Karbi Anglong at a height of just 10 to 12 feet.

The carcass of the huge animal was spotted in the morning.

The Forest department officials buried the animal after the post mortem.

DFO Pulak Choudhary said, “We are saddened with the death of the elephant. The incident took place at around 1 am. Our forest team is working relentlessly to prevent such incidents but unfortunately the elephant came in contact with the electric wire and succumbed to death.”

Locals blamed it all on the Power department alleging that these incidents could have been avoided had they hiked the heights of the electric posts.