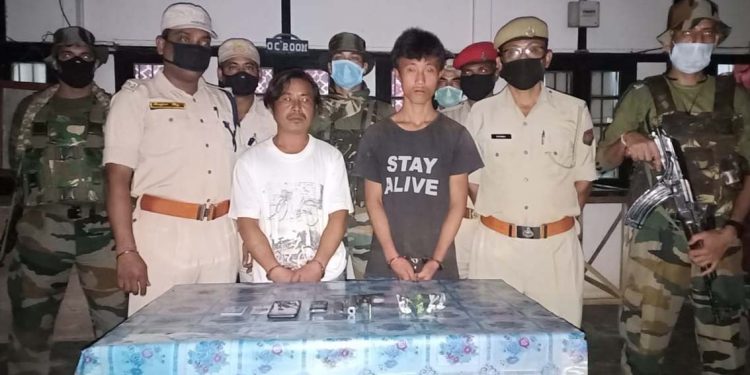 Two cadres of the National Socialist Council of Nagaland-Reformation (NSCN-R) have been arrested during a joint operation launched by Cachar Police and Assam Rifles.

According to the CPRO of Assam Police, on the basis of secret information, a joint operation launched at 1:30 am on Monday by Cachar Police and 37 Assam Rifles ‘C’ Coy.

The team, led by the sub-divisional police officer (SDPO) of Lakhipur, was also joined by the officer-in-charge of Jirighat police station and his staff.

The operation was carried out at Ramgaizang and Chamtila (Karuluang) under Jirighat PS and during search, the team was able to apprehend two persons.

The apprehended persons were identified as 20-year-old David Jeme, son of Sailash Jeme  Nrimbamglo from Mahur in Assam’s Dima Hasao district and 37-year-old Insalung, son of Sangama from Tousem in Manipur’s Tamenglong district.

The joint team also recovered one .22 pistol and ammunition along with 5 detonators and cord, the Assam Police CPRO said.

Accordingly, both the apprehended persons were brought to Jirighat PS for thorough interrogation.

“During interrogation they confessed that they are active cadres of NSCN(R),” Assam Police said.

“Both individuals are involved in extortion and extremist activities in bordering areas of Cachar with Tamenglong district of Manipur,” Assam Police claimed.