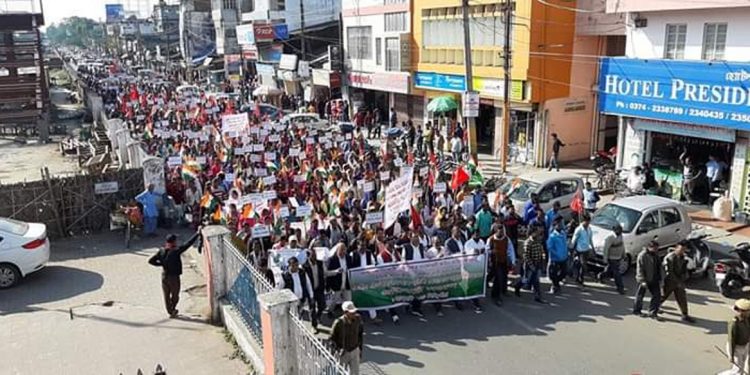 A view of the anti-CAA protest rally at Lahowal in Dibrugarh on Wednesday . Image credit - Northeast Now

Thousands of protesters joined a protest rally against the Citizenship Amendment Act (CAA), 2019 at Lahowal in upper Assam’s Dibrugarh district on Wednesday.

The protestors gathered at Muttock tea estate playground in Lahowal to raise voice against the new citizenship law.

The protest was organised by people from all walks of life in Lahowal.

The protesters holding placards and banners participated in the protest programme.

Addressing the gathering, Krishak Mukti Sangrama Samiti (KMSS) anchalik secretary Rajiv Gogoi said, “We demand to scrap the CAA as it is anti-constitutional.”

“It is meant to destroy the secular fabric of the constitution. The BJP wants to forcefully impose the CAA even after vehement protests against it,” said the KMSS leader.

Also read: Artist fraternity come together against CAA in Dibrugarh

“Akhil Gogoi raised his voice against the CAA, and the government has sent him to jail.”

“The BJP government is functioning in an arbitrary manner under the leadership of Prime Minister Narendra Modi. The government has been trying to kill democracy by suppressing the people’s voice,” he added.

Dibrugarh, the home district of Assam chief minister Sarbananda Sonowal, has witnessed huge protests and violence against the CAA.

“Chief minister Sarbananda Sonowal and finance minister Himanta Biswa Sarma have betrayed the people of Assam by supporting the CAA to be implemented in Assam,” said Jugal Baruah, who recently resigned from the Chabua unit of the BJP.

“We strongly oppose the CAA and demand for its withdrawal,” he added.

Coming down heavily on the BJP-led government’s dictatorship, Baruah said, “They are doing whatever they want to do.”

“We will continue opposing the CAA until it is not scrapped. It’s an anti-Assam and unconstitutional act and if implemented it will bring doom to Assam. We demand the repeal of the Act,” said a protester.

The artists’ fraternity also participated in the protest programme and protested against the CAA by presenting songs and poems.

The Assam Chah Mazdoor Sangha (ACMS) also took out a rally at Tinsukia and Margherita in support of their various demands.