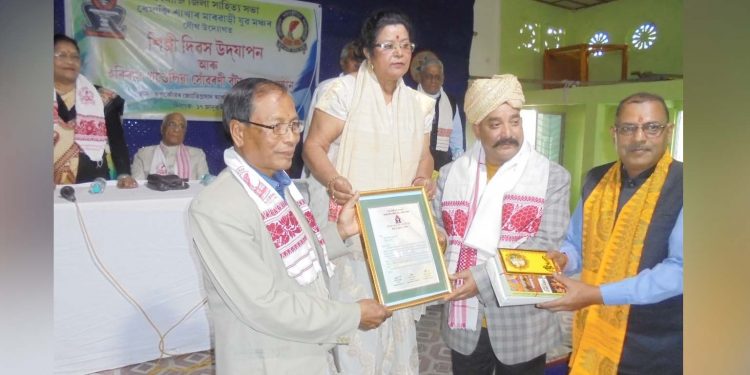 The programme was celebrated under the joint aegis of Dhemaji Zilla Sahitya Sabha and Dhemaji Marwari Yuva Manch.

The award consists of a citation, cheque worth Rs 10,000 and Marwari traditional dress.

Sarma is the director of the Song & Drama division of AIR Dibrugarh.

“Jyoti Prasad Agarwala was the best Assamese of all time who immensely contributed to the Assamese community,” he said.

He lamented that Jyotiprasad’s social, literary and cultural contributions towards Assamese society were no less important than those of Kabiguru Rabindranath Tagore.

“But the genius has not received his due national honour by successive governments,” he bemoaned.

Stating that the book Silpir Prithivi authored by Jyotiprasad reflects all the realities of life of the artistes, Bagrodia urged the organisers to preserve his creations for the future generations.

The programme included a ceremony of ‘Hariram Khandeliya Memorial Award’, which the Marwari Yuva Manch confers on a person who has made rich contributions in the field of literature, culture and fine arts.