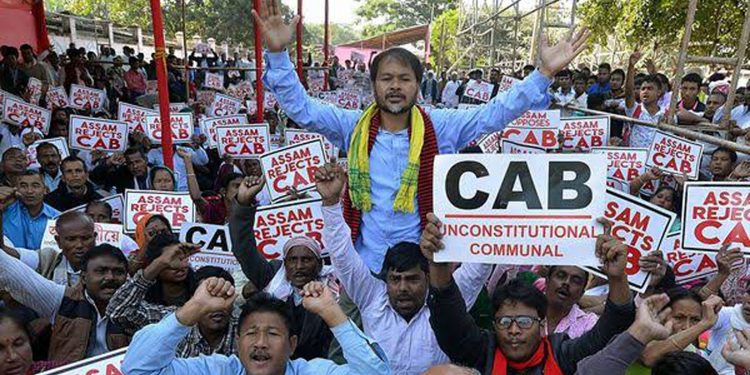 Hundreds of protesters on Sunday gathered in Guwahati to demand the release of peasants’ leader Akhil Gogoi arrested under the Unlawful Activities (Prevention) Act (UAPA) in connection with the violence during anti-CAA protests in Assam.

The protesters also condemned the killing of six people during ant-CAA protests.

The protest programme was organised by Left Democratic Forum, an umbrella organisations of several left parties, at Lakshidhar Bora Kshetra in Guwahati.

They slammed the government for arresting Krishak Mukti Sangram Samiti (KMSS) leader Akhil Gogoi and other activists of the organisation for intensifying agitation against CAA.

The protesters called for the government to drop charges against Akhil and others and release them without further delay.

Akhil and four other KMSS activists were arrested on Thursday in upper Assam’s Jorhat district as a preventive measure, amid violent protests against the Citizenship (Amendment) Act across the state.

Gogoi was on Saturday booked under the UAPA by the National Investigation Agency (NIA) and flown in to Delhi by the central agency.

The death toll in the protests against the CAA in the state has risen to six on Sunday.

A protester on Sunday succumbed to bullet injuries, who sustained during police firing on December 12 in Guwahati.

Two people had died in police firing on the same day.

17-year- Sam was a resident of City’s Hatigaon area and he died in police firing when he was returning from Latasil playground.

While Dipanjal, a resident of Chaygaon in Kamrup district, was killed in police firing at Lachit Nagar, Abdul at Laloonggaon in Guwahati.

Nayak, a resident of Udalguri was killed at Downtown area in Guwahati.  Dwijendra and Rajen were killed at Dibrugarh and Jorhat respectively.