Assamese dental students in UP stage protest against CAA 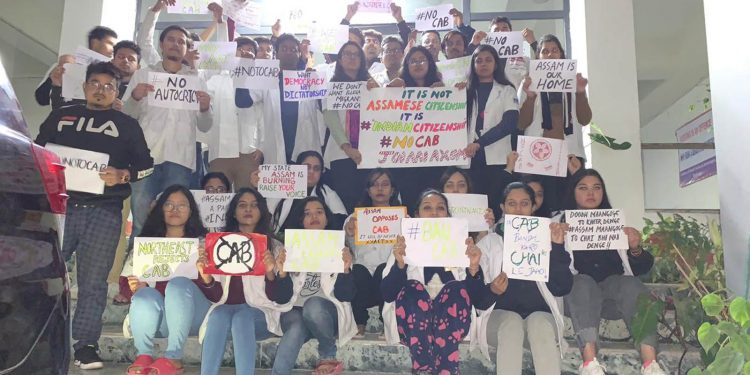 During their protest against the new citizenship law, the Assamese dental students in Uttar Pradesh said they stand united with those who have been protesting against the CAA.

The Citizenship Amendment Bill (CAB), 2019 has become an Act after President Ram Nath Kovind’s assent to the bill.

The Assamese dental students staged protest in Uttar Pradesh holding placards that read “Amak CAB Nalage” (We don’t want CAB); “Joi Ai Asom”, “No CAB”, “My state is burning, raise your voice”, “We don’t want illegal migrants”, “Assam opposes CAB, it will never be an Act”, “It is not Assamese citizenship, it is Indian citizenship”.

The CAB, 2019 was passed by the Rajya Sabha on Wednesday night.

It was passed by the Lok Sabha on the intervening night of Monday and Tuesday.

Massive protests against the CAB (now CAA) continue in Assam and several other parts of the Northeast since last Wednesday.

The Army was deployed in Guwahati and Dibrugarh and curfew clamped in various areas in Assam.

Despite the curfew, protestors took to the streets in Guwahati against the new citizenship law on Wednesday night and four protestors were killed in police firing.

Apart from the state, people from Assam living in other parts of the country including Delhi, Bengaluru, Chennai, Bhubaneswar, Hyderabad and even abroad in America and London, have also staged protests against the Act.