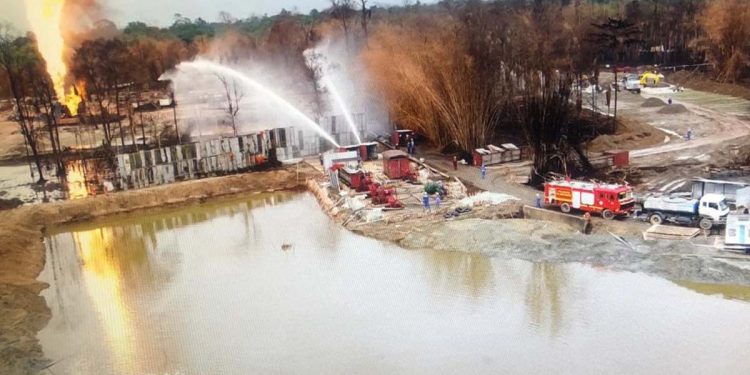 Petroleum and Natural Gas ministry Tarun Kapoor visited Baghjan Oil well number 5 blowout site on Tuesday along with CMD and Functional Directors of OIL to take stock of the work progress at the site.

He reviewed the progress and expressed his satisfaction with the execution of the plan.

He had a detailed discussion with the district administration and briefed them on the next course of action after reviewing all the details provided by the administration.

On Wednesday, Kapoor sat with the experts from M/s Alert Disaster Control,  VP Mahawar, Ex-Director (Onshore), ONGC and teams from OIL and ONGC to understand the plan of capping the well.

“Blockade in producing oil and gas wells has been lifted in few areas on Tuesday. Blockade still continues at few other locations affecting the production,” states an OIL release.

The closure notice served by Pollution Control Board of Assam (PCBA) was withdrawn on Monday.

PCBA has asked OIL to fulfil certain conditions within specific time frames. OIL will take necessary steps to comply with the directives/conditions of PCBA.

On Sunday, OIL had stated that it will move the Gauhati High Court challenging the PCBA’s order to shut down the Baghjan oil field in Tinsukia district.

Simultaneously, the geophysical survey is being carried out with instruments, viz. Resistivity meter, Proton precision Magnetometer and VLF (Very Low Frequency) meter to understand the subsurface activity. InSAR studies are being carried out to observe the subsidence if any. Analysis of data will be carried out in Jorhat and Hyderabad.