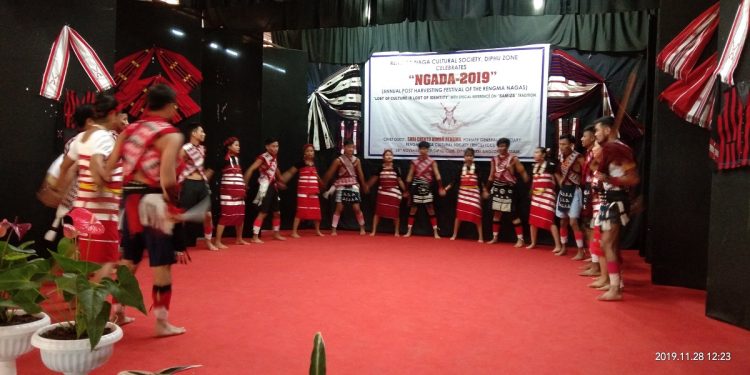 The Rengma Naga community of Assam’s Diphu celebrated Ngada festival at Diphu Club on Thursday with traditional fun and fervour.

The festival, a one day programme was observed with the theme ‘Lost of culture is Lost of identity’ with special emphasis on Samize – the oral tradition of Rengma Nagas.

It aimed at cultural revival of the one of the indigenous tribes of the hill district.

Both young and old took part with fervour gaiety.

In recognition of the indigeneity of the Rengmas, Karbi Anglong Autonomous Council has declared Thursday as a holiday to allow the tribe to celebrate their post harvesting festival.

He said, “We have our culture, language and tradition and it is us who have to preserve and promote it.”

“The Rengma Nagas, whether living in villages or urban areas should know the culture and speak the language and pass it on to the next generation,” he added.

On the occasion folk dances and song were presented.

The festival ended with a community feast.