The Saoraigwra faction of the National Democratic Front of Boroland-Saoraigwra (NDFB-S) on Thursday agreed to shun violence, come overground and join the peace process.

The NDFB(S) under the leadership of its president, B Saoraigwra signed a tripartite Suspension of Operations (SoO) Agreement with the central government in New Delhi.

To give a boost to the peace process, the NDFB(S) has also become a signatory to the proposed comprehensive Memorandum of Settlement with the Bodo organisations.

Also read: Peace accord with NDFB without G Bidai is “unfinished” and “futile” 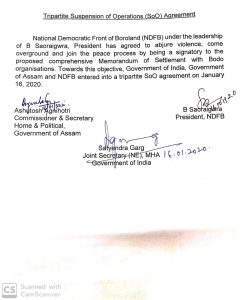 As per reports, the ministry of home affairs (MHA) is now working on a draft of the peace agreement, involving three factions of the NDFB.

Earlier, it was reported that a group of nearly 50 members of the Saoraigwra faction of the NDFB has reached Assam leaving their camp in Myanmar.

The NDFB (S) cadres were given a free-passage through the Mon district in Nagaland.

They are now housed in an Army base in Lower Assam.

The Saoraigwra faction is the third group of NDFB to initiate peace talks with New Delhi.

Earlier in 2005, the NDFB (Progressive) faction signed a ceasefire agreement with New Delhi.

Over 3,000 members of NDFB (P) are currently housed in three government-approved designated ceasefire camps in Udalguri, Baksa, and Kokrajhar districts of Assam.