Assam minister Sarma along with many other leaders of the BJP and allies camped at Varanasi to praise Modi who filed nomination papers for Varanasi Lok Sabha seat on Friday. 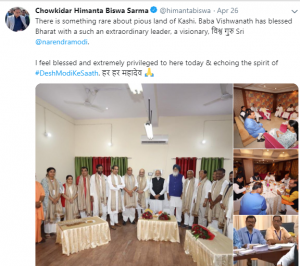 Minister Sarma is known for making visits to famous temples across the world on different occasions including Dhakeswhari temple at Dhakla in Bangladesh, Kamakhya temple at Guwahati.

So he feels it is ‘Baba Vishwanath’ who has “blessed Bharat (India) with such an extraordinary leader, a visionary, ‘Vishwa guru’ Narendra Modi”.

Also read: Praise the master is the new mantra for Northeast leaders

Stating that he feels “blessed and extremely privileged” to be at Varanasi, the “pious land of Kashi”, Sarma took no time to praise Modi on his Twitter handle with the words, mostly used by the devotees of Lord Shiva ‘Har Har Mahadev”.

Prime Minister Modi is seeking re-election to his current parliamentary seat in Varanasi, where he defeated dozens of rivals in 2014 Lok Sabha polls.

Varanasi, which is also known as Kashi, is in eastern Uttar Pradesh.

Assam set to get its sixth national park

Mizoram’s oldest man dies at the age of 110