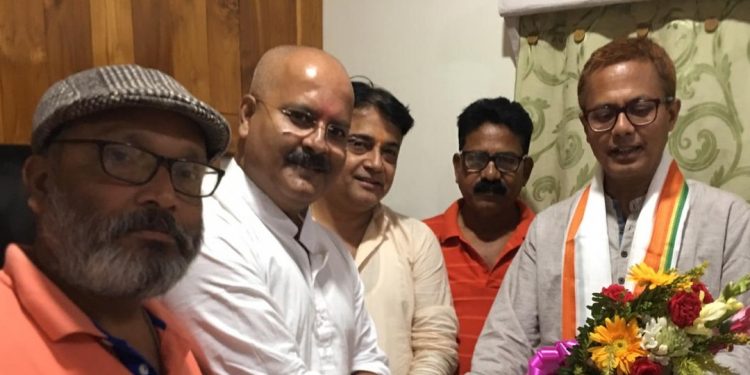 BJP MLA from Hojai, Shiladitya Dev, has once again brewed up a fresh storm while attending an event in Karimganj district of Assam on Tuesday.

Attending a centenary celebration for nobel laureate and legendary poet, Rabindra Nath Tagore, setting foot in Karimganj railway station exactly 100 years back for 25 minutes, Shiladitya Dev, said, “I sincerely propose that the name of Karimganj be changed to ‘Sribhumi’ as has been referred to by Tagore 100 years back.”

“I would definitely get down to the brass tacks of getting the name changed at the earliest once I leave from this place,” said, MLA, Hojai.

No sooner the words moved out from the event organized by the RSS and aptly attended by the BJP and RSS leaders of the three districts of Barak valley, the Congress leaders, defined, such a move as a vote bank politics.

Congress MLA, Kamalakhya Dey Purkayastha, speaking to Northeast Now, said, “The BJP leaders are trying to change the ‘history’ itself.”

“No development work, and add to it, the rise of unemployment has been kept aside for issues like changing the name of a place to make its mark. It’s very unfortunate,” said, Kamalakhya.

He further added, “The Centre has cleared the name of Silchar railway station to be renamed as Bhasa Swahid Station, but, Dispur, for the past two years is sitting over it.”

“None of the BJP leaders of Barak valley speak out even a word for it and now are talking of changing the name of Karimganj,” he added.

Siddique Ahmed, former minister during the Congress regime, speaking to this correspondent said, “Karimganj has been an island of peace with people from all walks of life and communities living together for ages.”

“No one has any issues with the name of Karimganj to remain as it is, and only, a controversial character like MLA Shiladitya Dev, would say such a thing to destabilize the communal harmony among people living out here,” said, Ahmed.