Assam: Human-elephant conflict refuses to die down in Udalguri 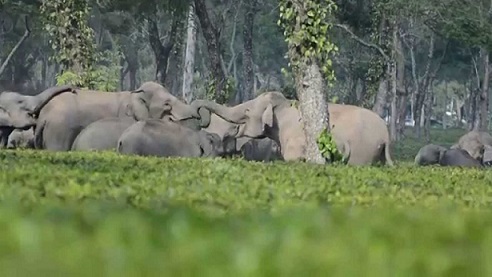 The Indo-Bhutan border areas of Udalguri district has witnessed a steady rise in human-elephant conflict over the past decade. The illegal human encroachment in the age-old elephant corridors by politically backed influential persons, former militants for the purpose of tea gardens, building estates among others has for long posed a serious threat to ecology of the district since long.

The unabated felling of trees in Khalingduar Reserve Forest and Bornadi Wildlife Sanctuary, has lead to the depletion of the green cover has compelled wild elephants to roam in human habitats.

The hapless villagers of Indo-Bhutan border areas including Samrang, Rajagarh, Suklai, Dimakuchi, Attarekhat, Bhutiachang are spending sleepless nights due to the terror of wild jumbos which frequent human habitation in night hours.

A herd of jumbos is also reportedly taking shelther in Attarekhat TE which has rang alarm bells among the tea garden authorities and labourers.

The consistent efforts of nature loving organizations, wildlife activists and a few government agencies have failed to reduce crop depredation loss and injury and death of human as well as the innocent wild elephants , which has made people living around wildlife habitats more hostile towards conservation.

“Udalguri has witnessed six human and three elephant deaths due to man-elephant encounters in 2018 till date. It is obvious that an increasing human population and destruction of green cover in a critical wildlife habitat is one of the main reasons for these conflicts,” says Nabajyoti Baruah, a known wildlife activist a Kalaigaon resident.

He further stated “The elephant’s food resources are shrinking. Each animal needs at least 100 sq. km. of forest space and food in it for foraging, but now that space is getting lesser and lesser. Where else can they go? He further laments the negligence and detrimental policies of the government towards resolving the menace.

He strongly advocates that the only feasible option is to prepare people to handle man-animal conflicts better and the forest department should help local vigilant groups in keeping a tab on the movement of jumbos.

He also states that government should prepare committees and adopt long term strategies like planting saplings of banana and jackfruit, bamboo species in elephant corridors and reserve forests, which in the long run would act as fodder for wild elephants and go way long in minimizing the casualities.