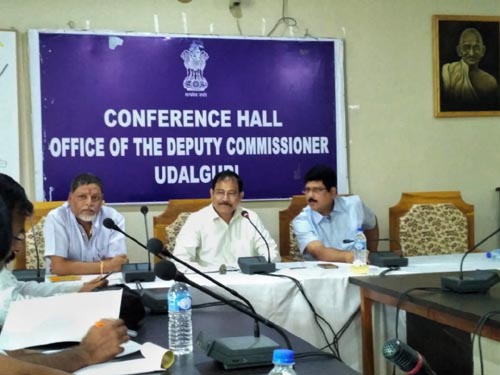 This comes in the wake of the directive of Election Commission of Indi a(ECI) for a detailed review and creation of a database of D-voters in Assam for preparation of the final photo electoral roll of the State slated to be published on January 4, 2019.

This was stated by Das at the Conference hall of the Deputy Commissioner’s office in Udalguri on Saturday. The provision for ‘special summary revision’ has also been duly scheduled.

As per the draft roll released by Das, the final tally of voters in Udalguri district is 4,27,767 — 2,19,0701 men, 2,08,696 women. The draft roll also stated the total number of D-voters in the three legislative assemblies Panery, Mazbat and Udalguri to be 8478. A total of 692 “D” voters who have already been declared Indians by the courts were placed among eligible voters in the draft photo electoral roll.

Das also exhorted the officials and booth level agents, appointed by political parties in case of special summary revision of electoral roll to appoint Booth Level Agent across all polling stations for preparation of a error free voter list. The Booth Level Officers (BLO) have also been directed to visit door to door for inclusion of new admissible voters, deletion of dead/shifted voters and correction of names.

The exercise holds special significance as the process of checking the status of all ‘D’ voters is being carried out after a gap of several years. The district election officers are involved in the entire exercise across the state presently being carried out in the office of the Chief Electoral Officer, Assam, at Janata Bhawan.