HPCL officials Md. Abbas Abdi and Vipul Gupta said, “This comes as great news for Rupsi Airport as from now onwards, the aircraft will be able to fuel at Rupsi Airport itself.”

Earlier, flights coming to Rupsi Airport had to refuel in Guwahati and Kolkata.

This significant development at Rupsi Airport is likely to increase the number of flights leading to the development of the area, said an airport official.

Rupsi Airport resumed its regular flight services on May 8, 2021 after a gap of 38 years after the Airport Authority of India (AAI) re-developed the airport under the Regional Connectivity Scheme (RCS) by the Ministry of Civil Aviation. 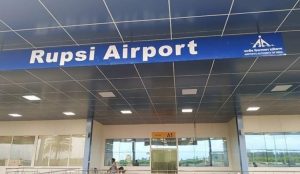 The Rupsi Airport presently operates one flight service, four days a week between Kolkata and Guwahati.

AAI sources said Rupsi Airport in Assam is a Visual Flight Rules (VFR) aerodrome which means flights can operate from this airport, only if visibility is 5000 m.  During rain, fog or bad weather, the visibility may come down below permissible visibility and in such cases flight may get delayed, cancelled or diverted.

“This condition can be improved by installing some navigational aids like DVOR, ILS, etc. that would enable flight operation even at low visibility, otherwise, in the upcoming winter season, flight operation from this airport might be disrupted during the bad weather,” said an official.

Rupsi Airport Revival Committee secretary Jyotirmoy Chakraborty has demanded that public transportation facility for passengers to and from the Dhubri ASTC bus stand and the airport be arranged during the flight hours.

Two Flybig flights land at Rupsi Airport daily and a similar number of flights take off daily except Monday and Wednesday.

Around 4,000 passengers have travelled through this airport since the resumption of the scheduled domestic air travel, said AAI sources.

Urging Dhubri deputy commissioner for immediate provision of transportation facilities, Chakraborty said, “Passengers to and from the Dhubri and Gauripur town and the airport are finding huge problem in transportation due to the distant location of the airport.”

“We urge the Dhubri district administration and the state transport authority to provide immediate public transport facilities,” he added.

“For passengers, who are tested Covid19 positive at the airport, it is better to have an ambulance nearby to take them to the Covid centre,” added Chakraborty.