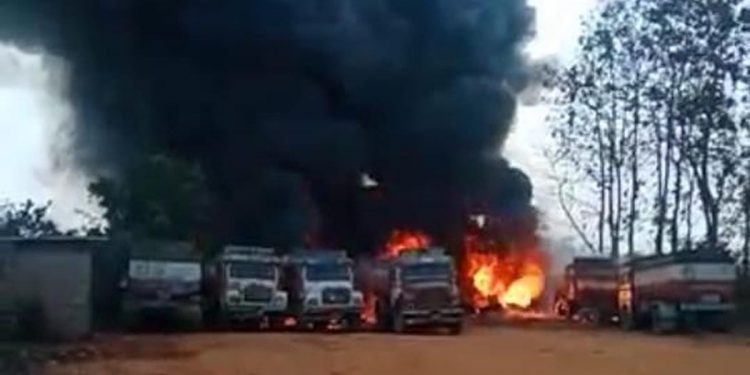 A view of the oil tanker which caught fire at Khatkhati on Tuesday. Image credit - Northeast Now

Fire engulfed an oil tanker at Satish Parking in Gautam Basti along the National Highway 39 at Khatkhati in Assam’s Karbi Anglong district on Tuesday.

According to sources, it was around 1 pm when the fire engulfed the oil tanker.

The parking is known for oil pilferage and it is for the second time that an oil tanker has been engulfed by fire at the same place.

Sources said there are several parking lots under the Khatkhati police station in Karbi Anglong district where oil is pilfered.

Within a span of 12 months, this was the fourth incident of fire in such parking and this is for the second time that an oil tanker caught fire at Satish Parking.

“The incidents of fire take place as oil is pilfered from the tankers,” sources alleged.

The fire was doused by the fire brigade personnel on time and prevented it from spreading further.

The police, who visited the spot, said the fire might have erupted due to “technical problem”.

“The criminal activities which take place in the area include prostitution, drug peddling, selling of IMFL whose excise duty is not paid in Assam. Khatkhati is a route for arms smugglers and it is used by car-lifters to pass the stolen vehicles to the neighbouring state of Nagaland,” sources said.