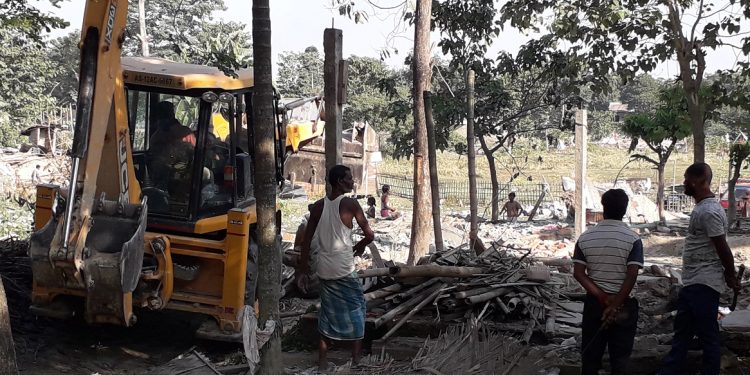 After almost two years, Darrang district administration on Wednesday again carried out an eviction drive against the encroachers at the same plot of government near Mangaldai Civil Hospital.

A huge team comprising labourers and security personnel supported by two bulldozers carried out the day-long drive where temporary and semi-permanent structures of nearly 60 encroachers were evicted.

“Structures in nearly 60 different encroached plots of land have been removed and 70 to 80 bighas of PGR land were freed from the encroachers,” said Dipsikha Saikia, circle officer, Mangaldai Revenue Circle.

“Initially a section of encroachers tried to resist but security forces could easily overcome it,” the circle officer added.

The freed areas of land is stated to be allotted for several proposed government projects including a cancer screening hospital and a women’s college among others.

The circle officer hinted at more such eviction drives to free all the 110 bighas of government land in the same area from the illegal occupants.

It may recalled here that nearly two years back a large area of government land were made free from the encroachers by a similar kind of eviction drive.

However, due to lack of necessary protection measures with passing of time the land was again came under encroachment.