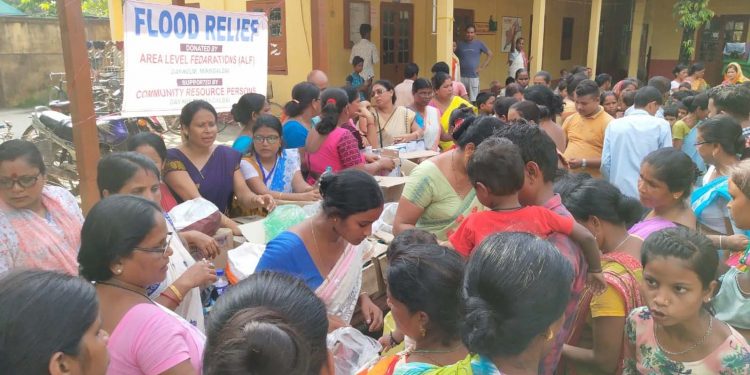 Baby food for infants and nutritious food for children and pregnant women being distributed at a relief camp in Darrang district. Image credit - Northeast Now

As an impact of a news published by Northeast Now on crisis of baby food for infants taking shelter in flood relief camps of Darrang district, many people and organizations have come forward to help them.

The members of the Child Welfare Committee (CWC) in Darrang district also made appeal to the people to come forward to help the destitute infants and children.

Following the news and giving response to the appeal of CWC, several people have contributed so that the infants, children and pregnant women of the relief camps get nutritious food.

The members of Area Level Federation under DAY-NULM, Mangaldai town on Saturday afternoon donated packaged food, milk, water besides baby food for around 250 children including 20 infants.

The relief camp, where the food items were distributed, is in Mangaldai Town Girls’ HS School.

“We decided to supply baby food and other nutritious food to the infants, children and pregnant mothers of the relief camp after we could know from a news report published in Northeast Now that the inmates were facing shortage of food,” the DAY-NULM members said.

Talking to Northeast Now, resource persons and curators of DUY-NULM, Purabi Ray Saikia, Jiminara Begum and Hiranmoyee Saikia Deka informed that “a packet of fruits and nutritious food was distributed to each of five pregnant mothers of the camp”.