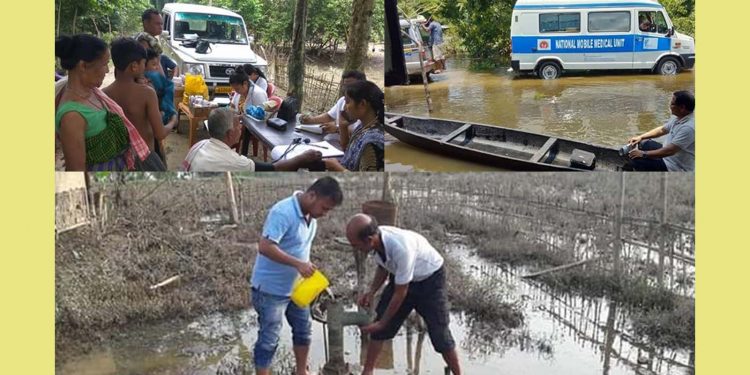 The flood affected people, who had been staying in relief camps, have started returning to their homes as the flood situation improves in upper Assam’s Dibrugarh district.

Altogether 102 villages and more than 62,000 people were affected in the recent wave of flood in Dibrugarh district.

Lezai and Kalakhowa areas of Dibrugarh were reeling under flood waters and the people of the areas had to take shelter in the relief camps.

“There were 110 inmates who took shelter at the relief camp in Lezai Higher Secondary School, but as the flood waters start receding, the inmates have returned back to their homes,” said sources.

On Saturday, this correspondent went to the relief camp at Lezai Higher Secondary School to gather information about the inmates but found that all of them went back to their respective homes.

Reena Das, head mistress of Lezai Higher Secondary School said, “All of them have gone back home on Friday after improvement in the flood situation. Altogether 110 inmates stayed here along with four pregnant women.”

Das also informed some of the flood affected people stayed in the relief camp for six days.

“Every year our school is used as a relief camp during flood. But this year, flood created havoc in the area and the people lost everything,” added Das.

Six relief camps were set up by the Dibrugarh district administration.

The devastating flood has left a trail of destruction in Dibrugarh district with as many as 28 lower primary schools suffering damages in the deluge.

“We have returned back to our house on Friday after flood water receded in our house,” said Arati Munda, a resident of Sessa Nagaon village.

“Our belongings were damaged in the flood and now, we don’t know what to do as the flood has taken all the things from us,” Munda added.

The medical teams were pressed into service and instructed the people to drink safe water and given them medicines to purify the water before drinking.

On the other hand, water started to recede in water-logged streets of Dibrugarh town.

The convey road area was affected due to waterlogging which caused immense problem for the residents of that place.

Recently, Dibrugarh deputy commissioner Pallav Gopal Jha conducted a meeting with all the departments concerned on the issue of waterlogging in Dibrugarh town.

Jha instructed the officials to find out the places of illegal encroachment and clear the areas for smooth flowing of water.