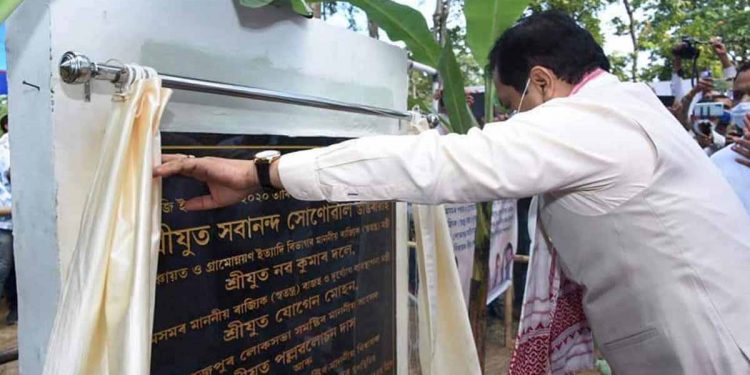 He inaugurated the construction work of the facility at Banhgora-Dhunaguri under Bihpuria Revenue Circle in Lakhimpur district.

Planned and developed by the Assam State Disaster Management Authority at the cost of Rs. 2.51 crores the flood protection facility will shelter both affected population and cattle during the period of inundation.

The G Plus 2 RCC structure would be used to host various socio-cultural and public programmes during the dry season. A meeting was organized for that occasion at the foundation stone site.

Addressing the public Chief Minister Sonowal said that his government had served the 3.5 crores, people of the state, by distributing one lakh land pattas and would do another one lakh in the coming days.

The facility will also have an uninterrupted power supply with a generator set and solar energy panels.

Laying the foundation of the structure the Chief Minister asked the local youth, women and senior citizens to monitor the construction work of the flood shelter for quality control.

He also informed the public that a Rs 10.5 crores project for the erosion protection work at Jamugurighat at Dhalpur had also been initiated.

Before that Chief Minister Sarbananda Sonowal held a review meeting with all head of the departments of Lakhimpur district at the conference hall of Deputy Commissioner at North Lakhimpur in the morning.

Sonowal mooted the idea of conducting a hydrological survey of the Subansiri river and asked the concerned departments for the same to find mitigation of the flood and erosion problem permanently.

The Chief Minister also took the stock of the COVID-19 situation in the district in that meeting and asked all the departments to monitor the developmental works and implementation of various schemes.