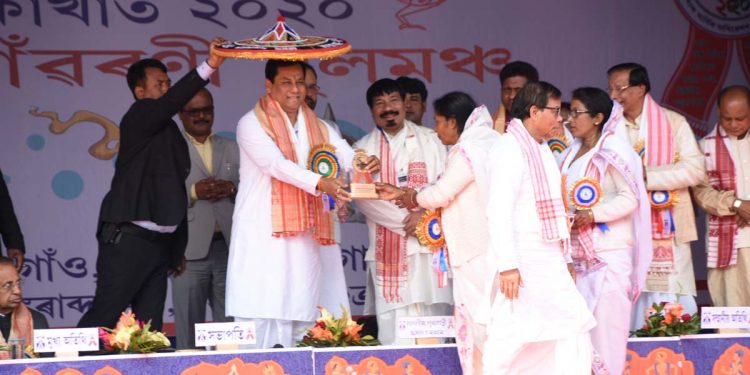 Sonowal made the announcement while attending the 89th annual session of Srimanta Sankaradeva Sangha at Kaziranga Sammanaya Kshetra in Golaghat on Thursday.

Sonowal said Rs. 80 lakh, accrued as interest from the total capital would help the Srimanta Sankaradeva Sangha to promote and spread Gurujona’s teachings transcending all boundaries.

The chief minister also said the university set up in the name of Srimanta Sankaradeva should transform itself into a centre of excellence and the state government would allot an additional 300 bighas to the university authority.

He also informed that his government for the first time has decided to celebrate the birth anniversary of Srimanta Sankardeva officially.

Stating that Gurujona has empowered the people of Assam from all aspects especially socially, culturally, spiritually and academically, Sonowal said the teachings of Gurujonais a fulcrum around which the entire Assamese society is revolving.

He also said Srimanta Sankaradeva’s ingenuity in the fields of social, cultural and spiritual landscape has given a strong personality to the people of the state in the 21st century.

He also underscored the need to emulate the teachings of Gurujona and said without that the endeavour of the people of the state to establish the state’s supremacy over the national arena would not be possible.

He also maintained, “Gurujona has taught us to march forward in life overcoming all obstacles.”

Chief Minister Sonowal also said moved by the teachings of Gurujona, the people of Assam should work hard and take a pledge to make themselves ideal citizens and win over hearts and minds of everybody.

He also hailed the role of Srimanta Sankardeva Sangha which has been able to usher in a sense of awareness and regeneration among the people of the state with regard to spiritualism and humanism.

Synchronising with the occasion Chief Minister Sonowal released a Nepali version of ‘Namghosa’.