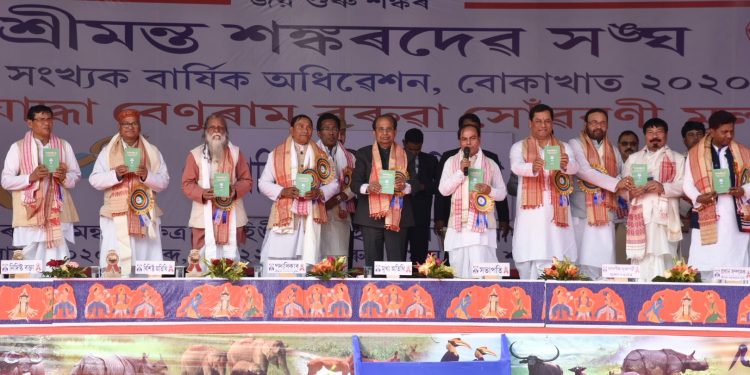 Assam Governor Prof Jagdish Mukhi said Vaishnavite genius Srimanta Sankardeva is no less in his contribution to the life and culture of our land than any contemporary gurus of his times.

Prof Mukhi said this at the 89th annual conference of Srimanta Sankardeva Sangha at Bokakhat on Thursday.

Speaking at the annual conference, the Governor said, “Srimanta Sankardeva, a 15th century apostle, born in this part of the country is unparalleled in the history of mankind in his contribution to life and culture of Assam.”

“He is a role model of mankind. He is a versatile genius, a music composer, innovator of a classical school of dance, a world class translator, a litterateur, a spiritual guru,” the Governor added.

“He was no less in his contribution to the life and culture of the land than any contemporary gurus of his times,” he added.

“He was a visionary, a lover of mankind who taught the mankind of how to being in the spiritual life without giving up worldly life,” the Governor also said.

Prof Mukhi said Sankardeva united Assam culturally and strengthened its society by demolishing caste barriers, uplifting women and lower caste people by stressing on ‘One God and One world’.

He encouraged to improve their economic condition and agricultural production, he added.

The Governor also lauded the efforts of Srimanta Sankardeva Sangha  for carrying forward humanistic ideals of Sankardeva in the society.

The sangha, is spreading the light of knowledge and education by establishing schools and colleges among the deprived people in the region, he said.

He said that Sangha’s most ambitious educational project is the establishment of a university to cherish the memory of Srimanta Sankaradeva and start a vast scope for research into his achievement and contribution to the society and humanity.

He said that he is confident that the university will be a centre of excellence both in providing quality education and moulding the attitude of young generation to make the life and society beautiful not only in Assam, India but across the globe.

State chief minister Sarbananda Sonowal present on the occasion said the teachings of Srimanta Sankardeva have supreme potential in empowering the society.

He also said that the Sankardeva university will be transformed into a world class university where the teachings of the Guru will get more importance.

The conference was attended by ministers Keshab Mahanta and Atul Bora, MLA Dergaon constituency Bhabendra Nath Bharali, Chancellor of Mahapurush Srimanta Sankardeva Vishwavidyalaya Kamala Kanta Gogoi, along with a host of other dignitaries.