Assam on the boil; BJP office vandalized in Golaghat, tyres burnt at many places

Assam is on the boil even as the Bharatiya Janata Party (BJP) is hell bent on tabling and passing the controversial Citizenship (Amendment) Bill, 2016 on Tuesday.

Even as the 11-hour shutdown brought normal life to a standstill across Northeast, sporadic incidents of violence have been reported from several parts of Assam. 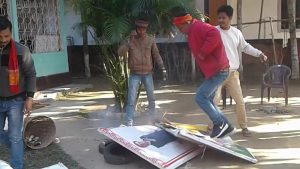 In Golaghat district of eastern Assam, bandh supporters vented their anger at the BJP office vandalizing it and setting banners and posters on fire.

Even the hoarding featuring Assam Chief Minister Sarbananda Sonowal who was once decorated with the title of ‘Jatiya Nayak’ by the All Assam Students’ Union (AASU) was not spared.

The protestors took out a rally to the Golaghat district office of the BJP shouting slogans like ‘BJP go back’. After reaching the BJP district office, the irate protestors gate-crashed into the office premises and started vandalizing whatever they could get hold of.

A BJP worker who had arrived a little later at the site told Northeast Now that the protestors could not be identified as they had already left till the time the worker arrived at the office.

The BJP worker further said that he had witnessed that everything was on fire when he arrived even though the office had one security personnel on duty.

Notably, the North East Students’ Organization (NESO) along with several prominent students’ bodies of all the north-eastern states had called for an 11-hour shutdown on Tuesday in protest against the contentious citizenship bill.

Notably, in a spontaneous show of anger women protestors had gheroed the BJP headquarters situated at Hengrabari in Guwahati just two days back.

Reports of protestors burning tyres to impose bandh have come in from Nalbari and other places across Assam. Even incidents of stone pelting at passing vehicles have taken place at several places.