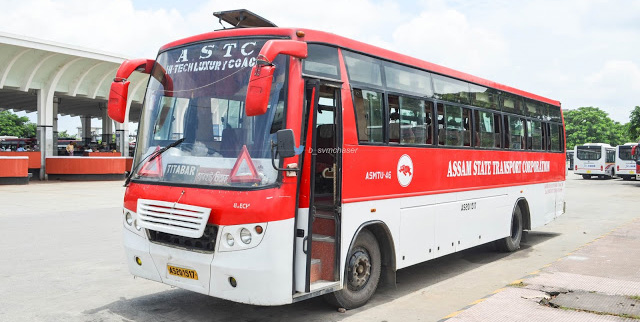 The Assam State Transport Corporation (ASTC) has started bus services from Dhemaji, Lakhimpur and Sonitpur districts to Dibrugarh and Tinsukia and part of Upper Arunachal and vice versa through Bogibeel bridge from Wednesday morning.

The people are relieved as their only means of transport to cross the river was ferries and mechanized country boats till Tuesday.

Along with the train services along the route launched by NF Railway, ASTC has introduced regular bus services between north bank and south banks besides part of Upper Arunachal Pradesh to enhance road connectivity and thus reducing the tedious ferry ride by several hours.

ASTC sources informed that it has started operating seven buses from Jonai station to Dibrugarh and other upper Assam areas on daily basis, while it has introduced one each from Dhemaji and Lakhimpur towns.

It has also started a bus service from Pasighat (Arunachal) to Jagun via Dhemaji, Dibrugarh and Tinsukia along the route.

Jonai (Dhemaji) ASTC Station in-charge Bokul Dutta informed that the corporation has initially started bus service along Dhemaji Bogibeel route for public convenience, but it would take some days for fixing of the timings of arrival and departures.

“We are happy that new bus services over Bogibeel bridge will ease journey of the people on both sides. Most passengers of the region prefer ASTC buses for long distance considering it is more convenient and safe mode of transport”, said a visibly enthusiastic Dutta at Jonai this afternoon.

It may recalled that the first ASTC buses from Majuli and Golaghat  started its maiden journey from Golaghat to Jonai immediately after opening of Bogibeel road on Tuesday, while same service was started between Majuli and Dibrugarh via Bogibeel bridge from the opposite site.

Introduction of the new bus services between the two regions has naturally brought cheers and relief to the common people on both the banks.