AASU, AJYCP, and ATASU with help of the artistes’ fraternity took out a mobile camp covering various parts of the Dhemaji district 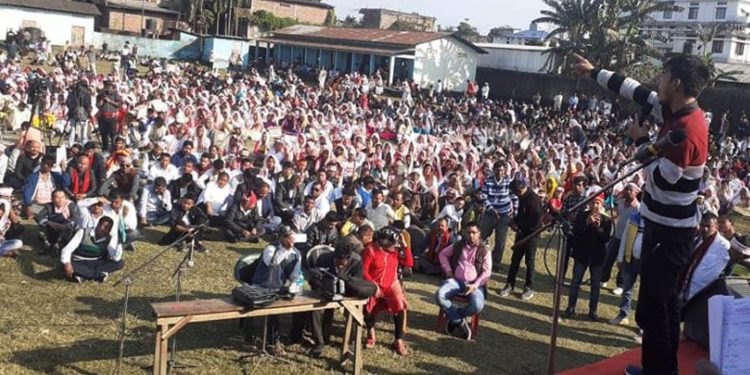 The people of Dhemaji district continue to protest against the Citizenship Amendment Act (CAA), 2019.

People from all walks of life in Dhemaji district have been raising voice against the new citizenship law.

The protests continue to be staged at Dhemaji town, Gogamukh, Bordoloni, Silapathar and Jonai under the district.

The protestors have been adopting different ways to protest and vow to continue the anti-CAA movement until the central government takes a decision to exclude Assam from the purview of the Act.

The AASU, AJYCP, and ATASU with the help of the artistes’ fraternity took out a mobile camp covering various parts of the district on Thursday and sensitized the rural people about the possible impact of CAA.

The anti-CAA awareness programmes were conducted at Bordoloni Chariali, Moromi Tiniali, Misamari and Joirampur under the Dhemaji sub-division while the organizations with the help of artistes are planning to cover rest parts of the district within the week.

The artistes recited poems and performed patriotic songs against the CAA and also chanted slogans against the BJP-led central government and its anti-people policy of enforcing the Act ignoring without consensus.

The organizations conducted ‘Janatar Garjan (Citizens’ Roar) at Silapathar Hindi School on Friday wherein popular singer Bipin Chaudang and many other artistes opposed the CAA and urged the citizens to continue the anti-CAA movement in a democratic way.

The leaders of the agitating organizations said the new citizenship Act would develop discrimination among different communities and diminish the identity of indigenous Assamese people in terms of language, culture, and traditions.

They are also of the view that the Act will adversely affect the demography of Assam, particularly in the Brahmaputra Valley.

The protesting organizations are extending support towards the 12-hour Assam bandh called by the Krishak Shramik Unnayan Parishad (KSUP) on December 30 demanding release of KMSS leader Akhil Gogoi, who is under judicial custody.

On Thursday, the special court of the NIA in Guwahati remanded KMSS leader and noted RTI activist Akhil Gogoi to 14-day judicial custody.

The NIA lodged a case against Gogoi under sections 120B, 124A, 153A, 153B of Indian Penal Code (IPC) and Section 18 and Section 39 of the Unlawful Activities (Prevention) Amendment Act (UAPAA).

Gogoi was arrested on December 12 by police at Jorhat when he was leading the anti-CAA movement in upper Assam.