Anti-CAB protests getting louder in Assam 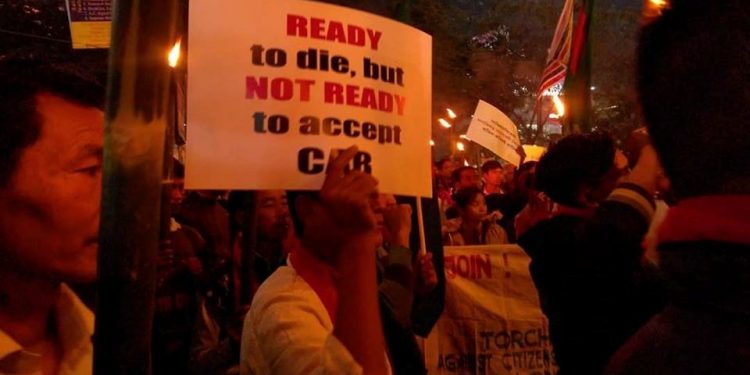 Hundreds of protesters took out cultural march against the Bill in Guwahati.

While the Centre set to table the Citizenship (Amendment) Bill (CAB) in Lok Sabha on Monday, protests against the contentious Bill escalated across Assam on Saturday.

Anti-CAB protesters took to streets at different areas across the State denouncing the BJP governments in the Centre as well as in the state.

In Guwahati, hundreds of protesters comprising students, youths, writers, artistes and activists of different organisations took out a torchlight procession and cultural march against the Bill from Guwahati Club to Zoo Road Tiniali on Saturday evening.

The students from several colleges in Dibrugarh, which is the home district of chief minister Sarbananda Sonowal, came out together to vent their anger against the BJP government.

The angry students staged a road blockade at Thana Chariali for an hour disrupting the traffic in the town.

“Sarbananda Sonowal betrayed us as he has not said anything against the bill which is anti-Assamese. The bill should immediately be scraped. We don’t want CAB,” said a protester.

In Digboi, activists of AJYCP and Chatra Mukti Sangram Samity (CMSS) took out a protest rally in the oil town demanding immediate withdrawal of the Bill.

Joining the rally, pro-talk ULFA leader Jiten Dutta said mere demonstrations on the streets would not yield the desired outcome, people must intensify their movements in more rigorous way.

Five youths got their heads shaved to register their protests against CAB at Police Point area of the town.

The members of All Assam Moran Students’ Union (AAMSU) also took out a bike rally in Tinsukia against the Bill.

The students’ union has called Tinsukia district bandh on December 9 and 10 against the Bill.

Members of different organizations including AJYCP, AASU, and students of Tezpur College, Tezpur Law College and Tezpur University registered their strong protests against the citizenship Bill in Tezpur.

The AJYCP activists took out massive rally in the historic Tezpur town and shouted slogans against the government and the BJP party.

(With inputs from Dibrugarh, Tezpur and Digboi correspondents.)