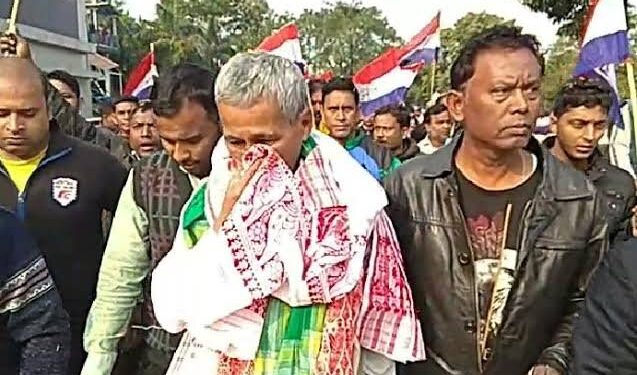 To evade ire of protesters, Asom Gana Parishad (AGP) minister Phani Bhushan Choudhury on Saturday, had to run away to safety in Lower Assam’s Bongaigaon district.

According to reports, Phani Bhushan Choudhury, who is minister for Civil Supplies of Assam, had gone to Manikpur on Saturday afternoon to attend a party programme of AGP.

Angry with the AGP minister’s silence on the controversial Citizenship (Amendment) Bill, a section of party workers staged a protest at Manikpur with black flags.

Anticipating physical attack, the minister immediately ran away from the spot while the meeting was in progress.

Choudhury was flanked by his security guards, and was whisked away in his vehicle to an undisclosed location.

After the minister’s escape from the spot, members of All Assam Students Union (AASU), AJYCP and KMSS staged protests by blocking traffic on National Highway 31 by burning tyres.