Assam: Wild jumbo electrocuted at Nagaon; another dies of injury at Rani 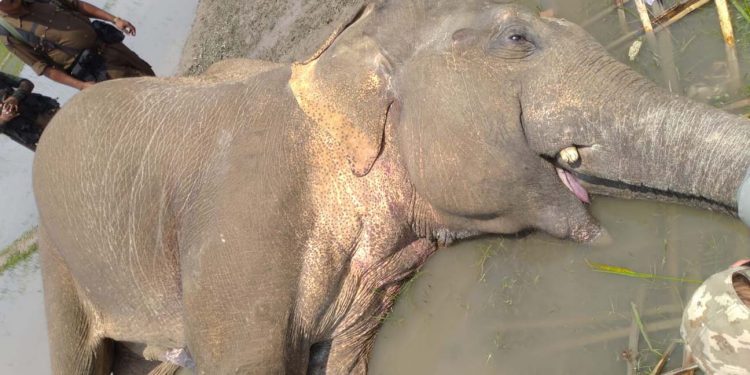 The wild elephant which was electrocuted at Nagaon. Image credit - Twitter @rahconteur

While a wild elephant was electrocuted in Nagaon near Kaziranga, another wild elephant succumbed to its injuries at Rani on the outskirts of Guwahati on Thursday.

According to reports, a wild elephant was found dead in Assam’s Nagaon district near world famous Kaziranga National Park after coming in contact with energized illegal fence, which was placed near a paddy field.

Wildlife experts allege that electrocution malaise on the north bank of Brahmaputra Valley has now begun to afflict the southern bank areas of the Brahmaputra.

In another incident, the injured wild elephant, which was seen in the Satar Gaon area at Rani on the outskirts of Guwahati on Wednesday, died on Thursday morning.

As per media reports, the wild elephant was found trapped in a pit of mud at Rani.

The villagers could not explain how did the wild elephant arrive at the area or how did it receive injury and fell into the mud pit.

However, with the help of the villagers, a team of forest department was able to successfully rescue the injured elephant on Wednesday.

Although the elephant was rescued, due to severe injury in its leg, the animal could not move.

The veterinarians from the forest department provided preliminary treatment to the injured elephant. However, it succumbed to its injuries on Thursday morning.

Media reports say that on Thursday, the villagers paid their last respects towards the elephant, which is called as ‘Gajaraj’ and according to Hindu belief ‘Gajaraj’ was ‘vahan’ (vehicle) of Lord Vishwakarma.

They offered flowers and covered the body of the animal with ‘phulam gamosa’.