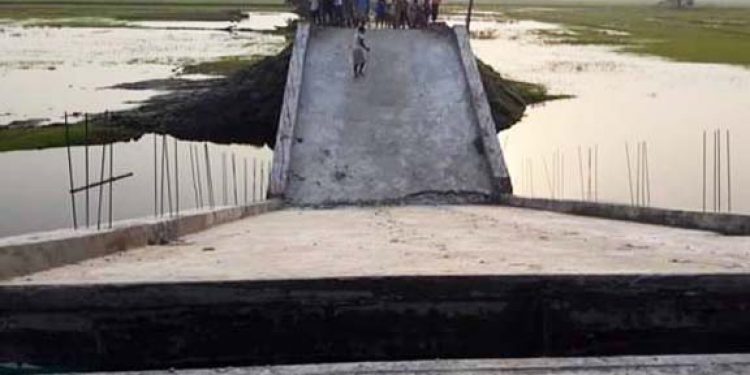 The under-construction bridge which collapsed near Sarupeta in Baksa district. Image - Northeast Now

An under-construction RCC bridge collapsed recently near Sarupeta under Baksa district adjacent to the Barpeta district.

The people of the locality have demanded probe into the matter.

Though no one was injured the incident, it has created sensation among the locals who have alleged that the under-construction bridge collapsed due to use of low-quality materials.

According to information, the construction work of the 5 km road along with the bridge has been carried out by a contractor from Ganakpara of Bajali Sub-division to Bartari-Sonafuli of Salbari Sub-division of Baksa district with an estimated cost of Rs 5,57,20,000.

The construction work of the project under the Prime Minister Gram Sadak Yojna (PMGSY) began in 2017.

The work has been carried out under the office of the executive engineer of PWD in Mushalpur Sub-division under Baksa district.

“The construction work was done with low-quality materials and due to this the bridge collapsed in the middle before it was opened for the use of the public,” said locals.

The people of the locality, who are in need of the road and bridge, have been demanding improvement of the surface communication since long.

The people of the area were hopeful with the start of the construction work of the road and the bridge, but after the collapse of the bridge, they fear that the whole work might have been done in a substandard way.

“We demand a proper inquiry into the matter,” said locals.