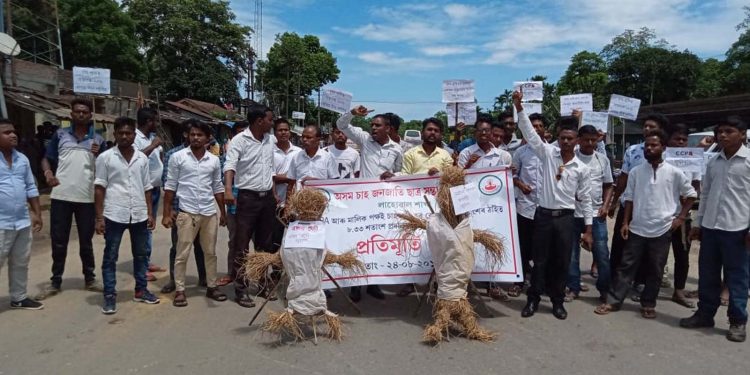 The ATTSA blocked the National Highway demanding 20 per cent puja bonus as against 8.33 pc bonus declared by the Consultative Committee of Plantation Associations (CCPA).

The protestors also burnt effigies of Prime Minister Narendra Modi and Assam Chief Minister Sarbananda Sonowal during the hour-long blockade that lasted from 11 am till 12 noon.

“We need maximum bonus before Durga Puja. We will not compromise with puja bonus. It’s a emotional issue for us,” an ATTSA leader told Northeast Now.

“We don’t want to see law and order situation in the tea gardens,” the ATTSA leader added.

The Consultative Committee of Plantation Associations (CCPA) is the umbrella organisation of five tea producers’ associations of Assam.

The CCPA in a press conference at Guwahati on August 20 had mentioned that the tea industry might not be able to pay more than the minimum 8.33 pc bonus under the Payment of Bonus Act, 1965.

The CCPA statement has drawn sharp criticisms from several quarters including the influential Assam Chah Mazdoor Sangha (ACMS), which is the largest tea labours’ union in the State.

Even Rajya Sabha MP and BJP leader Kamakhya Prasad Tasa has questioned the tea producers’ announcement on the issue.

According to CCPA, tea prices have remained stagnant over the last few years while laboures’ wages increased by around 22 pc last year aggravating the crisis faced by the tea industry.

CCPA member Bidyananda Barkakoty stated that from April to August 2019, the average price of tea during auction was Rs 164.97 as compared to Rs 170.70 during the same period last year.

Barkakoty, who is also the adviser to the North Eastern Tea Association, said the cost of production was almost Rs 200 per kg resulting in huge losses to the tea industry.

“The CCPA by announcing its inability to pay 20 pc bonus and sticking to the minimum rate of 8.33 pc as per the Bonus Act has created unnecessary anxiety and tension among the tea garden workers,” said ATTSA’s district publicity secretary Lakhindra Kurmi.

Puja bonus is a sensitive and emotional issue for the workers.

“Every year tea industry has been paying maximum 20 pc bonus and anything less than is not acceptable. We don’t want any sort of disturbances due to bonus-related issues,” said Kurmi.

“We don’t know why this time they are announcing to pay less amount of bonus,” Kurmi told Northeast Now.

This year Durga Puja will begin on October 4 and the tea companies are expected to announce their quantum of festival bonus by the second week of September.

Assam Chah Mazdoor Sangha has already urged the government to form a high-level expert committee to study the crisis faced by tea industry.

They also cleared their stand for providing maximum bonus.