The BJP has nominated Jorhat Lok Sabha MP Kamakhya Prasad Tasa in one of the two Rajya Sabha seats, for which election will be held on June 7.

BJP’s central election committee secretary JP Nadda in a statement on Monday said that the party has decided  the name of Tasa for one of the two Rajya Sabha seats.

Congress leader Bijoy Krishna Handique had been retaining the constituency since 1991. 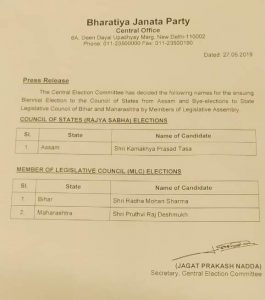 The saffron party, however, fielded state minister of state for Power, Topon Kumar Gogoi in place of Tasa from Jorhat constituency this time.

Assam finance minister Himanta Biswa Sarma had on Sunday told newsmen in Delhi that the BJP is leaving one of the Rajya Sabha seats to AGP this time.

While Sarma did not mention the name of saffron party candidate for the Rajya Sabha seat, he said that a person strongly connected with Assam politics and having relation with air and water of the state will be fielded by the party.

“Although Tasa was not given a ticket to contest the polls, he showed his dedication towards the party by wholeheartedly working for Topon Kumar Gogoi and ensuring the victory of the party candidate. Besides, he is a young leader and could perform well if nominated to the Upper House,” said the senior party leader.

The terms of Rajya Sabha MP Manmohan Singh and Santius Kujur will expire on June 14 this year.

While the Congress is unlikely to field any candidate this time due to shortage of numbers to ensure victory for its candidate, the BJP has decided to field Tasa in one seat while it will give one seat to its alliance partner AGP.