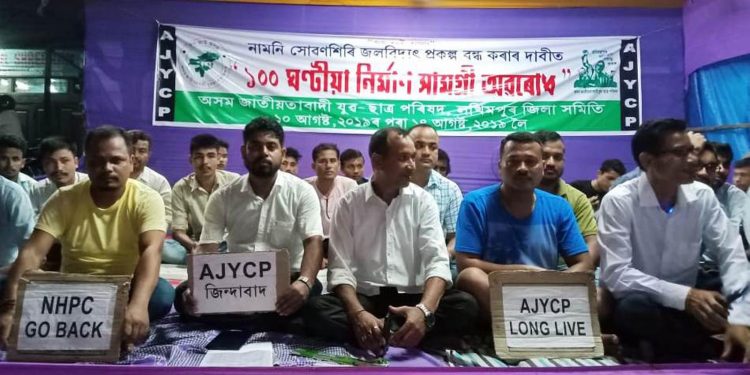 The AJYCP has announced a series of protest programmes against resumption of dam construction at Gerukamukh in Dhemaji district by the NHPC Ltd.

The student-youth body launched blockade of construction goods for the LSHEP dam at Khelmati in North Lakhimpur against dam work since Sunday.

Speaking to the media, Saurabh Das of AJYCP categorically stated that the organization won’t allow the construction of the dam on river Subansiri.

He said, “There is no alternative to agitation in the wake of the NGT’s nod to the LSHEP recently.”

The AJYCP has already sent a letter to Prime Minister Narendra Modi opposing resumption of the dam work after participating in a sit-in demonstration in North Lakhimpur and blocking the NH-15.

The anti-dam organizations in Assam claimed that the existing expert committee on the LSHEP was biased towards big dams which reportedly pose threat to the environment.

Construction works at Gerukamukh for 2000 MW LSHEP dam over Subansiri has been halted since December 2011 following massive protests.