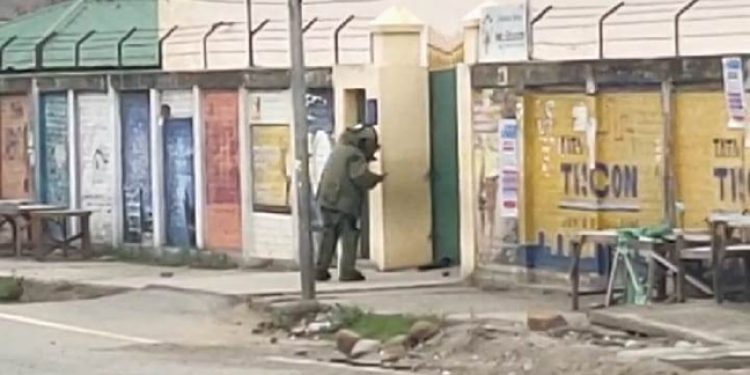 A bomb squad expert is seen near the IED placed at the gate of Little Flower School in West Implhal. Image credit - Twitter @easterncomd

The Assam Rifles thwarted another major explosion in Manipur and saved the lives of the children and teachers of a school at Imphal West.

According to information, on a tip off, an operating team of the Assam Rifles rushed to Sagaiprou area at Imphal West in Manipur on Tuesday and detected an IED placed outside the gate of Little Flower School in the area.

The bomb squad of the Army later defused the powerful IED.

The school is situated along the National Highway-2.

The Assam Rifles has been continuing its efforts to carry out operations against insurgency across the Northeast.

On April 11, based on specific information, the Assam Rifles recovered arms and ammunition from a place near Sikibung Tangkhul village at Ukhrul in Manipur.

Those apprehended in connection with the recovery along with recovered items were handed over to police for further investigations.

On April 9, the operation unit of the Assam Rifles carried out a joint operation with police and recovered one AK 47 along with ammunition and explosives in Ukhrul district of Manipur and thwarted plans of the underground militants of causing disturbance during the general elections 2019.