During her poll campaigns, Sushmita Dev travelled from one masjid to the other and played communal card: Rajdeep Roy 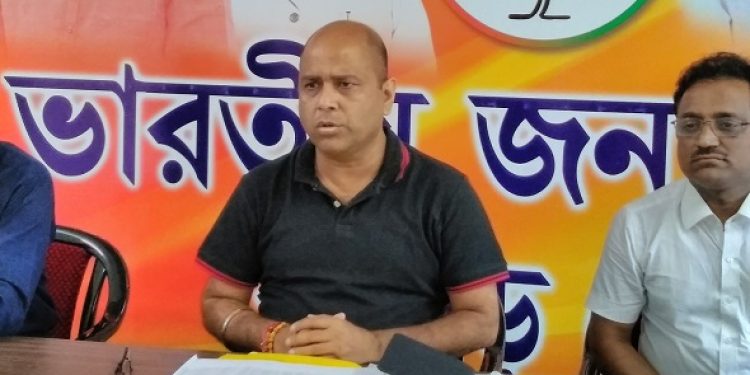 The war of words, between candidates, continues even after the end of polling for the ongoing Lok Sabha elections in Assam on April 23.

While Silchar’s sitting MP Sushmita Dev has filed a PIL against Prime Minister Narendra Modi and BJP president Amit Shah in the Supreme Court for allegedly violating model code of conduct, her opponent for the Silchar LS seat, BJP’s Rajdeep Roy has  condemned such a move by her on Monday.

Addressing his first press conference at their party office after polling for the Silchar LS seat that was held on April 18, Dr Rajdeep Roy said, “I strongly condemn such a move by her (Dev) and that too, on a day when the fourth phase of poll is going on in many parts of the country. This shows that they (Congress) have conceded for eventual defeat once again in 2019, for which, she and her party are up to such political gimmicks.”

Dr Roy added, “All throughout her campaigns, Sushmita has travelled from one masjid to the other and played the communal card very close to her chest. I say with full authority and the reviews that we have got, we are going to win both the seats of Silchar and Karimganj, this time round.”

Later talking exclusively to Northeast Now, Dr Roy, when being asked about Dev citing that only ‘fear’ of losing Silchar seat compelled Modi to come here twice, said, “I feel proud and honoured to have PM Modi coming to Silchar. He is not a national leader only but a world leader. In his last five years, he has visited Barak Valley four times while Dr Manmohon Singh in his close to 20 years of being a Rajya Sabha member from Assam, never visited Silchar, and only came seven to eight times to Guwahati for a few hours.”

Speaking further to this correspondent, Dr Roy informed, “By bringing in her national leader Rahul Gandhi, she could not amass more than 5,000 odd people which forced her to do a road show with Priyanka Gandhi, on a day, when the reduction sale was on. All of these won’t work in her favour and I am confident of leading across all the seven Assembly constituencies for Silchar Lok Sabha seat.”

Before winding up his conversation with Northeast Now, he said, “I am grateful to my party workers of booth & block level and higher-ups. In all, I have conducted 230 outdoor meetings, 70 closed door meetings, walked almost 130 kilometres in the 28 wards of Silchar to win this time.”

When asked about state BJP president Ranjeet Kumar Dass’ reported instructions to find out those ‘party workers’ and ‘leaders’ who have worked against him or the party, Dr Roy said, “I must say, I am yet to get an official letter in this regard and I am not thinking much into it.”