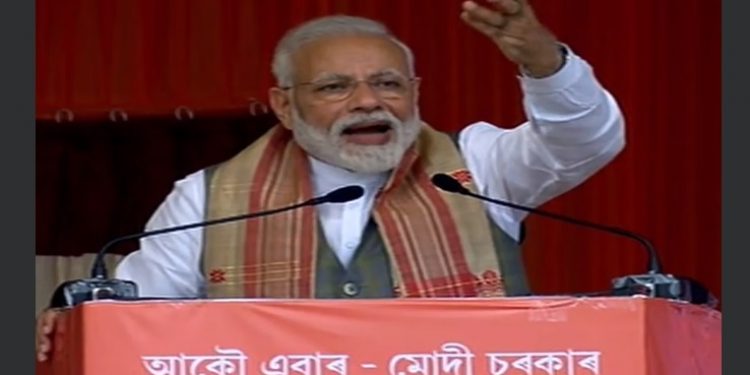 Prime Minister Narendra Modi has cancelled his proposed visit to Assam on April 7 next.

This was announced by Bharatiya Janata Party (BJP) sources late on Tuesday.

Prime Minister Modi was supposed to address an election rally at Silchar in Barak Valley on April 7 next to garner support for the party candidates in Silchar and Karimganj Lok Sabha constituencies.

The new date for the election campaign will be announced shortly, according to party sources.

In Silchar Lok Sabha constituency, the BJP has fielded party’s state spokesperson Rajdeep Roy who gets ready to give a fight against Indian National Congress’ sitting MP and All India Mahila Congress president Sushmita Dev.

On the other hand, in Karimganj Lok Sabha constituency, the BJP has fielded Kripa Nath Malla, who is the sitting BJP MLA of the Ratabari Assembly constituency.

Malla was elected as an MLA on Congress ticket from Ratabari Assembly constituency in 2011, but later joined the BJP and got re-elected on BJP ticket.

This would have been the second visit of the Prime Minister to the State within seven days.

Earlier, Prime Minister Modi launched his parliamentary election campaign in the northeastern states from Arunachal Pradesh where he addressed a public meeting at Aalo in West Siang district of the State on March 30.

He addressed a huge rally at Moran in Dibrugarh and then wooed the voters at Gohpur in Biswanath Chariali in another election rally.