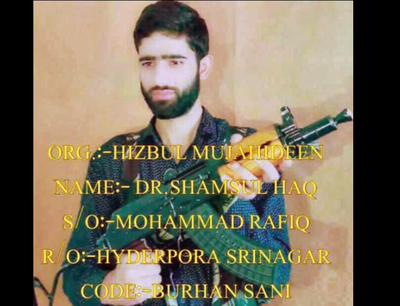 The younger brother of an IPS officer posted in Assam, who went missing from the Kashmir University campus in Jammu and Kashmir on May 22 this year, has joined the terrorist organisation Hizbul Mujahideen.

This has come to light after the outfit released a photograph of Shamsul Haq, the younger brother of former West Karbi Anglong district SP Inam- Ul-Haq Mengnoo, in which he is shown holding an assault rifle and sporting a holstered pistol.

The photograph of the armed Shamsul went viral in Jammu & Kashmir after the Hizbul released pictures of about a dozen new recruits on social media on Sunday to coincide with the death anniversary of its slain commander, Burhan Wani, The Times of India reported.

Among the pictures of the others is 25-year-old Shamsul, originally from Draggud village of south Kashmir’s Shopian district. A Bachelor of Unani Medicine and Surgery (BUMS) dropout, Shamsul joined the outfit on May 25 this year on fleeing from the college campus at Zakura, on the outskirts of Srinagar, said a senior police officer.

Mengnoo, who was posted at Hamren in West Karbi Anglong as SP was transferred on June 27 as commanding officer of APBN after reports of his brother joining militants’ outfit surfaced.