Assam: In favour of paper, waste materials to create idols for Durga Puja

Anjan Tamuli of Rowriahjan Kathiatoli village with his group creates idols with a budget of Rs 4,000 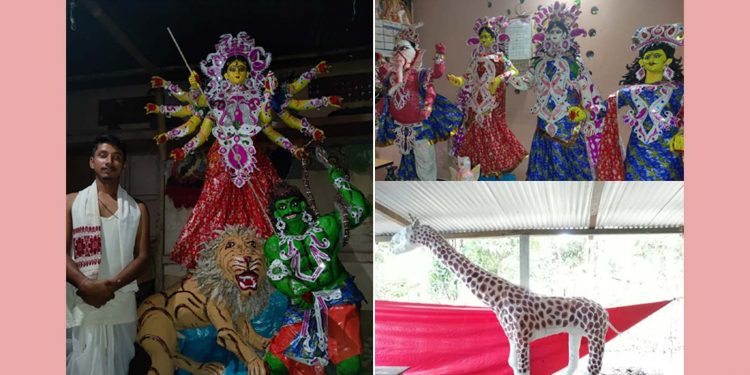 A youth in Assam’s Jorhat district, who has shown the path of reducing pollution in the fragile river systems by making idols for Durga Puja from newspapers, continues his lone endeavour in the hope that others would follow suit.

With a budget of Rs 4,000, Anjan Tamuli of Rowriahjan Kathiatoli village, about 12 km away from Jorhat town, has this time used newspapers as well as coloured papers for better effect and to decrease the use of paint, water and acrylic.

“I have this year not only used newspapers but also art papers, coloured wrapping, not the plastic variety, to make the flowers, decorations and ornaments,” Anjan told Northeast Now.

Having begun making the idols since 2015, Tamuli has been able to inspire 10 youths to emulate his example and form a group called ‘Medini Creations’.

These youths put up an exhibition on different themes, the exhibits being made up of waste materials like jute sacks, saw dust and bamboo frames.

In the first year, Tamuli had made an idol of Bharat Matri and created awareness against the violence going on in the BTAD area and also on rhino poaching.

Tamuli, who was then a first year law student and is today an advocate, has put up different themes on social and other issues along with other members of the group.

In one year, it was on a grandmother telling stories to her grandchildren, something which has been lost in nuclear families today.

In another year they showed how people planted trees but for want of water and care, the trees withered and died.

“This year, we have just made different kind of animals like the turtle, dinosaur, crocodile and giraffe out of the waste materials to attract children, he added.