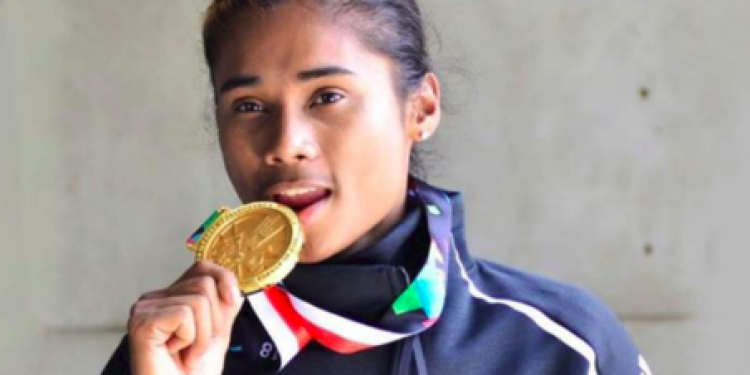 Track queen Hima Das of Assam who is in Doha (the capital of the peninsular Arabian Gulf country Qatar) for the 23rd edition of the Asian Athletics Championship is “gearing up” for the event.

The sprinter will take part in the 4x400m relay race of the athletic championship which will commence from April 21 next.

Hima tweeted, “Geared up for our first international challenge of 2019 here in Doha. #AsianAthleticsChampionship2019.”

Earlier, too, in a tweet, Hima had informed her fans about her departure to Doha on Thursday.

Doha houses the Khalifa International Stadium which will transform into an Olympic-like platform, as the Asian Athletic Championships kickstarts on April 21 next and will continue till April 24 next.

The previous edition of the Asian Athletics Championships, which was held in Bhubaneswar, witnessed India bypassing China and Kazakhstan to emerge on top of the medal tally list with 22 medals.

All eyes are on Hima as the country expects her to bring glory just like she did at Tampere, Finland, last July.

Notably, in the recently concluded Federation Cup Athletics, Hima won the gold medal in women 400 metres but failed to qualify for the Asian Athletics Championships in this event.

However, Athletic Federation of India selected her in the six-member 4×400 metres women relay team. The other members in the squad are Poovamma, Saritaben Gaekwad, Jisna Mathew, Vismaya and Sonia Baishya.

Geared up for our first international challenge of 2019 here in Doha. #AsianAthleticsChampionship2019 pic.twitter.com/j113HOEi7A