Assam: Food poisoning in Udalguri, over 50 including kids hospitalised 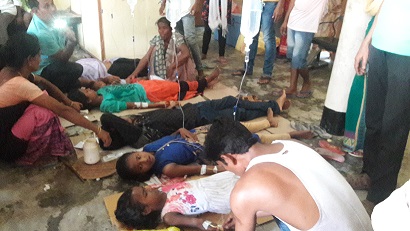 In a suspected case of food poisoning, over 50 people including women and children were admitted to the Panery Subsidiary Health Centre in Udalguri district on Saturday.

According to information, the people fell ill after consuming prasad at Pub-Panery Bishnu Mandir as a part of monthly naam-prasanga on Friday night following which the devotees including a good number of women and children suffered from dizziness and vomiting since last midnight.

The patients were rushed to the health centre where they have been currently undergoing treatment. Members of students’ bodies and locals in large number visited the health centre to take stock of the situation.

“We took part in the naam-prasanga and consumed chickpea (but) and laddu which were part of the prasad served to the devotees, following which I along with my two children suffered uneasiness and started vomiting,” said a patient Lakhi Priya Lahkar.

Meanwhile, the conditions of the patients are stated to be stable as informed by attending Ayurvedic doctor Santosh Singh Yadav.

Insecticide-treated pulses have been detected as the prime cause for prasad poisoning cases.

According to experts, chick peas (but) and green grams (magu) are treated with high doses of insecticides before being exported to States like Assam – where there is high demand of these pulses – from the producing States. This is done so that the pulses can be stored for a longer period.

But due to improper methods of storage, such pulses again get damaged during the storage period.

Experts view that the insecticides (chemicals) are absorbed by the pulses and it generally can’t be washed off. So, badly stored chick peas and green grams if offered as prasad may harm the consumers and cause food poisoning cases, say experts.