The injured have been rushed to the hospital 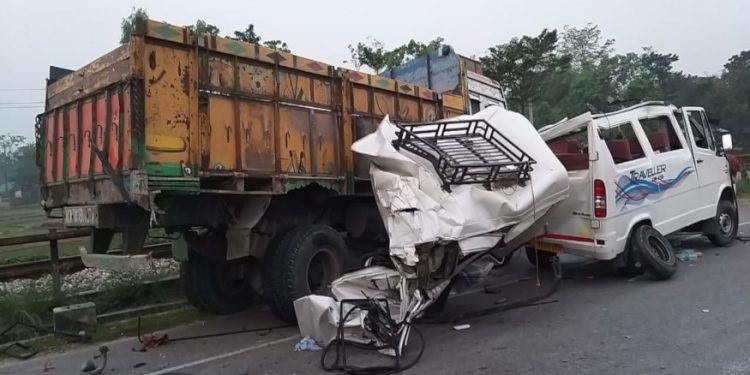 The Traveller vehicle which rammed against the stationary truck.

A tragic road accident took place at Gauripur in Dhubri district on Saturday morning. Five people perished on the spot and several others have been injured.

Reports stated that a Traveller vehicle carrying a wedding party in the wee hours of the morning today lost control and rammed against a stationary truck. Five people lost their lives on the spot.

The dead have been identified as Shambu Rout, Kanchan Bin, Subhash Adhikari and Utpal Barman. The identity of the fifth person has not been known till the time of filing of this report.

According to information received, the wedding party was on its way from Bongaigaon to Golokganj in Dhubri district when the accident took place.

Seventeen persons were travelling in the vehicle. The injured have been rushed to the hospital.

The vehicle involved is again a Traveller. (It was a Traveller vehicle which rammed head-on with a car killing a renowned doctor of Sivasagar and his wife on the spot on Friday near Burapahar range).